Cancel the unwanted noise in your life

Sonyâs WH-1000XM2 is the king of the consumer-level headset market. 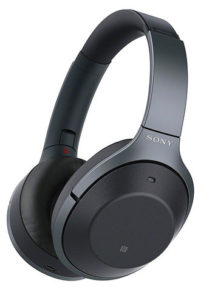 Everyone has that frustrating experience of sitting close to someone with awful headphones â not headphones that are unstylish but a set of stone-age ear-covering headphones that seem to send audio in all directions. This encounter seems to happen during inescapable situations such as on a packed plane or on a family vacation.

Addressing the offender can result in hours of tension. If you truly canât escape, there is only one surefire remedy: noise cancelling.

All kinds of headphones claim to be ânoise cancelling,â but few truly neutralize the world at large. Since the technology entered the consumer market in the mid-1990s, the company synonymous with noise cancelling has been Bose. At a premium cost, audiophiles could pick up a set of Bose over-the-ear headphones and hear practically nothing but the music they were hoping for.

The word âpracticallyâ is key. While the first few generations of technology were excellent compared to basic headphones, they are nothing compared to todayâs headsets. Just to get a little into the weeds, modern noise cancelling works using counter noise signals emanating from the headset. Using a technology known as active noise control, these smart headsets combat incoming ambient noise with a counter signal. Basically, the sound of the world around us tries to get into the headset, but the headset bounces it off with its own wave of compressed sound waves.

As cool as that is, the headset-adorning music lover didnât want to plunk down the several hundred â or into the low-thousands â of dollars for this technology in the 1990s. Bose owned the marketplace and was mostly tailoring to audiophiles, music producers and the wealthy.

Today, seemingly every company youâve heard of that works in sound replication sells noise-cancelling headphones. Bose is still the top dog as far as the marketplace is concerned, but as the consumer base has grown, the interest of larger manufacturers has followed. Sony, Beats, Sennheiser and other headsets have become just as intelligent at killing unwanted noise. As an added bonus, theyâve helped push the price point lower. At the moment, Sonyâs WH-1000XM2 is considered the king of the consumer-level headset market. At $210, these drastically undercut Boseâs QuietComfort 35 II, priced at $350.

Of course, price is not the only element to consider when picking up a set of cans. One reason it took so long for noise-cancellers to catch on was that their bulky, helmet-esque look was not something people were looking to rock. With the rise of âBeats by Dre,â the soup-cans-banded-to-the-side-of-your-head look has become a thing, but there is still a reason in-ear headphones (or âear budsâ) are the best seller. They are compact, lightweight, donât draw attention to the user, can be picked up for cheap, and while they may not cancel as much outside noise, in-ear systems donât tend to let too much out.

Still, for audio purists, letting in that ambient noise is a serious bummer. So if you just canât rock the soup cans, there are some in-ear options, but they generally cost just as much and donât come close in exterior sound suppression. Funny enough, Bose is miles ahead in this arena with both in-ear noise cancelling tech and price. Boseâs Quiet Comfort 20 has been on the market for five years, and it is still considered the best in-ear option.
Now for the major downside â keeping these things charged. Noise-cancelling means power must be supplied to the headset. So while most of these systems still act as headsets when powered off, theyâre not much better than those trash headsets that were the source of your ire in the first place. ♦