No other person has served in the Legislature as long as Wally Horn has. 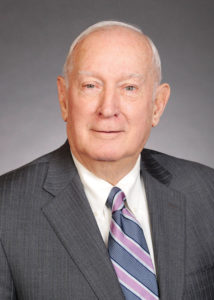 There was noteworthy news coming out of the Iowa Legislature recently.

This may surprise you, but I am not referring to the headlines about Bill Dix, the Iowa Senateâs majority leader, although that news certainly created a buzz from border to border.

The Shell Rock Republican resigned a few hours after photos and video were made public that showed him at a Des Moines bar kissing a lobbyist employed by the Iowa League of Cities.

The embarrassing embrace was too much for Senate Republicans. They were still smarting from the $1.75 million settlement inflicted on taxpayers last fall in a lawsuit filed against the Senate Republican staff by a female employee. She had accused Dix and other leaders of tolerating sexual harassment.

Watching Dixâs political career implode on a bar stool is not the Senate news Iâm referring to (although people around the Iowa Capitol wondered how Dix could be so stupid â or cavalier). What I am referring to involves a milestone that could stand for generations without being challenged.

At a time in our nationâs history when âelected officialâ has become more of a sneer than a title of admiration and respect, I invite you to consider state Sen. Wally Horn, a Cedar Rapids Democrat, as a counterpoint to that impression.

The deadline for candidates for state and federal offices to get their names on the ballots for the 2018 Iowa primary election has now passed. Horn made news because he decided not to seek re-election.

This will be the first time since 1972 when Horn will not stand before voters for their approval or rejection. By the time he leaves office in January, he will have given 46 years of his life to serving the people of Iowa.

In the 170 years of history since Iowa became a state, no other person has served in the Legislature as long as Wally Horn has.

He has served during times when Democrats were in the majority and during periods when Republicans held the upper hand. He served through prosperity and financial crises.

He was returned to office during conservative waves and during the TATBO movement â an anti-incumbent period that drew its nickname from its admonition for voters to âThrow All the Bums Out.â

Yet, Wally Horn remained. Now at 84, the affable retired high school teacher and coach has been given his own nickname, âThe Dean of the Dome.â

When Tom Vilsack, a lawyer from Mount Pleasant, was elected to the Iowa Senate in 1992, he often called Horn âCoachâ â out of deference for Hornâs other career and out of respect for Hornâs guidance when the future governor was learning the ropes in the Legislature.

Horn had been in the Legislature for 20 years when Vilsack arrived. At the time, Horn was the Senate majority leader, the same role Bill Dix occupied until last week.

Horn grew up in Bloomfield, where his father ran a gas station and later served as sheriff. Horn served in the Army during the Korean War after graduating from Bloomfield High School.

He had never given any thought to going to college until his senior year when John Smonik, a Bloomfield High School basketball coach, planted a seed that later led Horn to Truman State University.

âAt the time, I had never considered it,â Horn recalled a few years ago. âCoach Smonik encouraged me to complete my education, and I truly appreciate everything he did for me. I appreciate teachers, and my votes show it.â

Hornâs experience as a high school athlete and coach prepared him in ways you might not imagine for serving in the Legislature. Chief among them was learning how to lose.

Lots of politicians today in Iowa and Washington, D.C., would do well to listen to Hornâs advice.

âAs a legislator, I lose more than I win,â he once told a reporter, âand I have to learn to lose and to go on in order to win some more.â

He added, âYou learn there are mountains you can move and to go around those you canât.â

Horn has been a disciple of the approach to lawmaking practiced by the late U.S. Senator Edward Kennedy: âNever let the perfect be the enemy of the good.â

In other words, nothing of benefit will be accomplished for the people you serve if lawmakers refuse to compromise or if they take an itâs-my-way-or-nothing approach to finding solutions.

In the grand scheme of things, thatâs what we ought to celebrate about Wally Hornâs long record of public service. ♦

Randy Evans can be reached at DMRevans2810@gmail.com.