Country band will perform at Principal Park for their Ballpark Tour concert on Oct. 8. 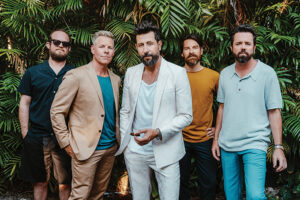 Since country band Old Dominion formed in 2007, theyâve found success with seven No. 1 songs on the country charts, such as âNo Such Thing as a Broken Heartâ and âWritten in Sand.â Since 2018, theyâve won a total of eight Academy of Country Music awards and Country Music Awards for group, song and video of the year.

Old Dominion will perform at Principal Park for their Ballpark Tour concert on Oct. 8. The band hopes to hit a homerun with the fans, as theyâve already knocked out eight music awards and earned seven Billboard chart toppers. Keyboardist, songwriter and guitarist Trevor Rosen recently spoke to CITYVIEW about their upcoming tour.

In addition to Rosen, Matthew Ramsey and Brad Tursi of the band also write songs for other country musicians, such as Keith Urban and Blake Shelton.

âOur songwriting is what fueled our success as a band,â he says. âWhile we were writing songs, we were honing our craft. We get to live two dreams in one â we get to double dip.â

He recalls when their first song, âBreak Upâ was a radio success.

âAt the time, we said, what if we made it to the top 40? The top 30? It kept climbing. We said, âOh, my God, this could actually happen.â Our hard work and dreams came true. The door cracks open for you, and itâs a special one.â

Ironically, one of Rosenâs first dreams began in Des Moines, but not with his music career.

In 1994, Rosen lived in Des Moines, playing ice hockey with the Des Moines Buccaneers. When he played in 1995, they won the triple crown â three different championship games. To top it off, Rosen scored the game-winning Gold Cup goal.

âAt the time, hockey was my No. 1 priority â my biggest dream,â he says.

On off days, heâd play with a band at Java Joesâ open mic nights or on a street corner in downtown Des Moines. However, a move to Nashville fueled his singing career instead, where he met with like-minded musicians, forming Old Dominion.

âWeâre genuinely friends,â Rosen says about the bandâs success. âWe enjoy each otherâs company, and we laugh on the bus. Itâs a self-policing organization. Nobody has a big ego. If they get too big for their britches, they get shot down.â ♦