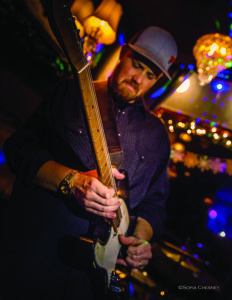 You can catch Matt Woods at Leftyâs on May 13 with the Midnight Dogs, or at Jasper Winery on June 3 for the Malcom Wells and the Two-Timers CD release party.

Matt Woods, an American roots and blues musician, spins the musical roulette each month. One night, his band, The Matt Woods Band, entertains the crowd. The next night, he strums along with Malcom Wells and the Two-Timers. Another gig in Kansas City lands him with Dustin Arbuckle. Or catch him Thursday night with the Midnight Dogs band.

Woods, a guitarist, singer and songwriter, wants to play â23 hours a dayâ if possible. Playing as frequently as possible is how he became a proficient showman.

In college, Woods played baseball and knew he couldnât do the sport forever. He needed something to fill his time. He didnât take lessons initially. He was a self-taught left-handed guitarist. About five months into picking up a guitar, he started playing gigs.

âIt was rough at first,â he admits. âThereâs a lot you can learn by performing instead of practicing at home.â

Heâs played guitar for 21 years and doesnât believe in the âTâ word.

âItâs not just talent,â he explains. âItâs the ability to focus and work hard, which has led to my success.â

His success includes winning the Iowa Blues Foundation challenge twice and being a semi-finalist in the International Blues Challenge. Heâs recorded six albums under his name, with the last two consisting of all original material. Heâs played on numerous albums for a variety of genres and other musicians. Matt Woods and the Thunderbolts opened for Pat Benatar and REO Speedwagon at the Iowa State Fair concert in 2010.

One of Woodsâ favorite and most memorable gigs was at Blues on Grand (now Gaslamp).

âThatâs where I grew up as a musician,â he remembers. âItâs my home club. I saw all my heroes standing 3 feet away from me. I canât put a price on how much I learned in that room, more than any lessons could offer.â

He credits âmillionsâ of musicians who have been influential in his career, including those from Iowa: Joe Price, Bo Ramsey, Greg Brown, Patrick Hazell and Rob Lumbard.

He says the live music scene in Des Moines is stellar, not only because of the mentorships heâs developed, but due to the cooperation and camaraderie between the musicians.

âThe secret is getting out,â he says. âDes Moines is not a drive-through town. Weâre really fortunate to have great live music in Des Moines. Itâs really an overlooked market. We consider ourselves to all be on the same team. Itâs not always the case in markets like Nashville or Austin.â

So, whether Woods is playing a solo act or with a band, it doesnât matter.

âI always want to play as much as possible, 23 hours a day,â he says. âMy goal is to work hard enough to be a player that gets the respect of musicians who I respect. I want to work as much as I can … because thatâs the only way to get better.â ♦