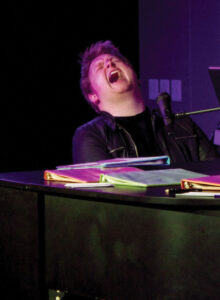 Andy Anderson plays all the instruments and sings in each of his four albums.

For musician Andy Anderson, the pandemic temporarily squelched his decade-long gigs with the Dueling Pianos. However the energetic and multi-talented musician and performer focused on recording four albums instead.

Anderson first began playing drums at age 7. At age 11, he knew he wanted to be a musician after listening to Freddie Mercury of Queen.

âFreddie had passed away, and I saw a TV special and his music video. I became infatuated with him, and something sparked. It changed my life,â he says.

âGrowing up, we had no money. I learned how to do all the music and instruments myself. It basically paid off, as I had no life as a teenager,â he says.

He lived in Nashville for 10 years, performing as a session musician. He returned to Iowa. In 2009, he and Mike Leeds were offered a gig at the Piano Bistro. Two of their piano players had quit, and they were looking for a replacement.

âIâd never done it before,â he says. âI was nervous.â

However, the duo caught fire, and they quickly learned. Since then, he and Leeds have played hundreds of venues in the Midwest. Their audience includes kindergarteners to âdrunk adults.â

Their dueling pianos act is part comedy and pure entertainment, something Anderson thrives on.

âWeâre like Chris Farley and David Spade. Itâs a constant interaction, playing four hours of all requests, and you have no idea in advance what youâre going to play,â he says. âAny song I hear on the radio, I can play note for note. I donât know how I do it.â

Heâs done a popular Billy Joel and Elton John piano duo tribute with Tony Bohnenkamp (of Pianopalooza) complete with full costumes. One of his favorite songs is Queenâs âBohemian Rhapsody.â

âI never get tired of it. Once people hear it, they become a kid,â he says.

As the pandemic halted performances, Anderson dusted off his 100-plus songs heâs written over two decades. He rewrote and recorded in a studio he and Leeds co-own, The Rock Shop in Huxley. For the albums, heâs the sole band, playing all the instruments and singing, resulting in four albums.

The first streaming album, âConversations and Accusations,â is a pop, rock and upbeat album â a Queen-type production, complete with harmonizing.

Subsequent albums include diverse musical genres including acoustic Americana, a Beatles-type tribute and piano-led album with influences by Elton John.

âMy passion is performing,â he says. âItâs not about being famous. Itâs about doing what you love.â ♦