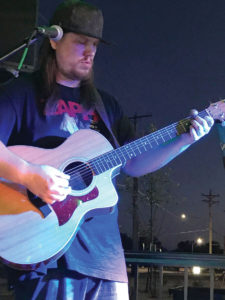 When Dustin Farrow learned to play the guitar, his favorite songs to play in his high school band were by hard metal band Metallica. But that was about to change.

After graduation, he moved to Phoenix, attending college to become an audio engineer. Farrow completed an internship at Dark Horse Recording Studio near Nashville. He and his buddies attended different music jam sessions and concerts in Memphis and Nashville.

One jam session changed his mind about playing only metal songs. He attended a blues festival in Mississippi honoring a 75th birthday of a seasoned player.

âIt was my first experience with blues. An older Black gentleman played along with a bass and drummer. It was amazing. Theyâd never played together before, but they sounded so tight,â he says.

After that experience, Farrow explored a Southern blues rock favorite â the Allman Brothers. He listened and learned the history of the blues, which he discovered spills into nearly every genre of music. He cites another benefit of playing the blues: âPeople canât really dance to metal music, but they can the blues.â

After college, Farrow returned to the Des Moines area, where he worked sound at the Wells Fargo Arena and the Civic Center. Again, more diverse music filled his ears. He saw Billy Joel, Elton John and âWicked â The Musicalâ and was able to get behind the scenes with musicians. He continued to play his guitar and had âno intention of being in a band again.â

âThe first time was a complete disaster,â he admits. âI really needed to work on it.â

He now plays with the buddies he jammed with years ago. He reconnected with his guitar instructor and longtime Des Moines area musician James Biehn. Biehn asked Farrow to join Southbound, an Allman Brothers tribute band.

Last year, Farrow put his own band together as Dustin Farrow and The Relics. He plays mostly cover songs and a few originals. Heâs written and recorded six originals, while interning at Dark Horse.

âItâs like its own community. Itâs the best networking. You have all the musicians at your disposal,â he says.

Farrow remains positive about his talents despite the pandemic canceling his gigs.

âWhen Iâve played, itâs like ecstasy. Itâs the best feeling in the world,â he says. âYou can have a shitty day, and all your worries roll off your shoulder. All your hard work pays off, and everyone is enjoying it, getting in the flow.â

Catch Dustin Farrow and The Relics at Down Under Lounge on Oct. 9 or Uptown Garage Brewing on Oct. 17. ♦