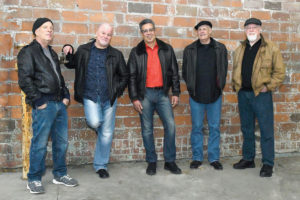 Itâs one last âhurrahâ for a new band of veteran musicians from Des Moines. The RhythMatics, who are all older than age 60, arenât ready to pack up their musical instruments, not just yet.

Band members of the RhythMatics have to their credit two Iowa Rock and Roll Hall of Famers. Current and past bands theyâve played in include the Cavaliers, Boomerang, Sumpin Do, Tony Valdez Large Group, Sam Salomone, Jan Hammer (the Miami Vice theme song creator) and more.

Jim Parker, cofounder and drummer for the RhythMatics, says their name implies what they do â the act of getting into perfect rhythm. Band members include Danny Nicholson, guitar; Matt Terronez, keyboards and vocals; Randy Ward, bass; and Scott Abrahamson, keyboards. Parker explains why they share the same musical foundation.

âWe all have an incredible work ethic,â he says. âDanny and I felt the clock ticking and wanted to be in one more serious band.â

âAfter we played a Stevie Wonder tune, people told us they havenât heard that song in decades. We play it, and it morphs into becoming a little of ourselves. Weâve played songs where the crowd went berserk and everyone exploded out of their seats and began dancing,â he says. âWhen we played a gospel version of Princeâs âPurple Rain,â we had a girl in tears saying sheâd never heard it done like that before.â

Thatâs what the band wants â feedback from the crowd. Parker encourages fans to chat with the band about whatâs working or not working. In the past, egos may have prevented honest feedback.

âWe all want this band to be approachable,â he says. âSometimes if our ego is invested, itâs hard. What I like might be different than what other band members like. Weâre here to make people happy. Without feedback, we donât know if weâre doing a good job. We appreciate people taking the time to tell us how weâre doing.â

The band plays private and local gigs, including Des Moines Yacht Club and Down Under Lounge. Whatever the venue, Parker says he is fortunate to play in a band of professional musicians.

âI havenât played in a band where 100 percent of the guys are as passionate as they are,â he says. âThis combination of guys is pretty cool.â ♦