Blues morphed into rock and roll 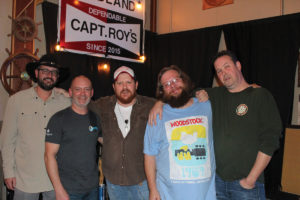 When Dust Radio plays a new venue, they only bring their guitars, playing a repertoire of originals and covers. The bandâs founder, James Nicholson, explains.

âWeâre loose and donât have a set list,â he says. âWe decide on the first three songs and then play whatâs based on going on with the crowd.â

The bandâs name comes from a Chris Whitley song.

âThe name seemed to roll off our tongues,â he says. âIt also explains our music. Itâs nothing new. A little dusty, but itâs a modern take on the classics.â

They play classic rock, Americana-roots sound and a âblues morphed into rock and roll.â Nearly 70 percent of the songs they play are originals. They play covers by the Allman Brothers, Marshall Tucker Band and the Rolling Stones. Nicholson, who plays guitar, says, âI call it Midwestern rock. Itâs an old-school sound.â

Other band members include Aaron Winters on guitar and vocals; Rob Short, guitar; Chuck Stroud, bass guitar; and Dan Tripp on drums.
Winters and Nicholson are the chief songwriters and enjoy a strong musical connection. For their upcoming record, the music simply credits, âsongs by Dust Radio.â

âWe realized our songwriting is a group effort. The band seems to have musical intuition, so the songwriterâs credit reflects that,â he says.

With four guitars, the sound is tight and complements, rather than competes, for a unique blend. Nicholson and Short have strummed together for eight years.

âIâve learned where his space is and mine,â Nicholson says. âWe try to serve the song, and I intuitively know when to play the parts or if Rob should take a solo.â

âWe love all the shows,â he says. âWe enjoy connecting and dancing, when the crowd gives that back to us, it takes us to a whole other level. Itâs the bandâs job to create the atmosphere.â

Nicholson says the Des Moines band scene is stellar. He cites that if a band member experiences a disaster, all musicians support one another.

âWhen you look at the list of bands playing in Des Moines, thereâs a lot of serious talent,â he says. âWeâre privileged to be part of a great music scene and a tight-knit group of local music that people donât realize. People who donât get out and see live music donât know what theyâre missing.â