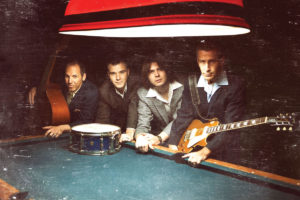 The Greenwood Lounge can take you back a few decades. Inside are faded wall hangings of dogs playing poker with Christmas lights dotting the dÃ©cor. Patrons sit on black cracked leather bucket stools while the band serenades the toe-tapping crowd. The bandâs name is the Soul Searchers, and they call the Greenwood âhomeâ on Thursday nights.

Johnny and the Soul Searchers formed in the 1990s after a popular Sunday blues jam. When Johnny left the band, Scott Eggleston dropped the first name and continued playing with the same musicians for 16 years. Band members include Eggleston on guitar and lead vocals, Erich Gaukel on bass guitar and stand-up bass, Mark Grimm on drums and Neil Stoffregen on keyboard.

The band plays a mix of blues, surf rockability, slow and jump blues. They also play original music, with a new CD recorded at Midday Studios coming out in November. Gaukel says itâs hard to define their genre.

âWhen I joined (in 1993), it was just blues,â he says. âWhen our harmonica player â Malcolm Wells â left for another band, then we needed new songs without a harmonica. We thought weâd try 1950s-1960s songs.â

To add to the charm, Egglestonâs coiffed hair and clothing is reminiscent of decades-old nightclubs. He sings into a retro-silver microphone. Playing the nightclub act, heâll call out fellow musicians in
the audience and thank friends by name for coming in.

The band plays numerous nightclubs and private parties and recently played at Byronâs in Pomeroy. Eggleston estimates heâs played more than 2,500 concerts. He says thereâs comfort in having a weekly gig at the Greenwood.

âThereâs zero administrative work, and itâs offered 52 times a year,â he says. âWe know it will always be a good time.â

Soul Searchers was the first band to ever perform at the Greenwood, when they played for its 75th anniversary party in the parking lot.

âThe next fall, Bill Landis (Greenwoodâs owner) said he got rid of a few booths and told me to get my guys over there to play for tips,â remembers Eggleston.

For the past 10 years, the band has been a staple on Thursday evenings, playing to consistent crowds of all ages and loyal fans.

The bandâs members also perform other musical endeavors. Gaukel plays with a church band; Grimm is a music teacher at Drake and plays jazz. Stoffregen plays in the Nadas, and Eggleston performs solo gigs.

Playing with the Soul Searchers doesnât feel like work to Eggleston.

âI feel lucky and blessed to play with a few guys for that long,â he says.

Catch the Soul Searchers at the Greenwood Lounge on Thursdays and at Captain Royâs on Dec. 13. ♦