Canadian rockers experience a full-circle moment after building fan base in small towns. 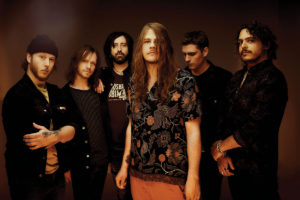 lorious Sonsâ lead vocalist, Brett Emmons, took time away from the band while going back to school to study literature at a university in Canada. He told his band to âscrew it,â while they performed for six months without him. His goal was to be a writer, but it wasnât long before he asked his brother if the offer stood for him to return to the band.

It did, and itâs proved successful. The Glorious Sons boasted seven of the top 10 rock radio tracks in Canada. In 2015, they received a Juno award nomination for rock album of the year.

Bringing their music to the U.S. proved promising. Their hit âSawed Off Shotgun,â known as âS.O.S.,â hit No. 1 on the Billboard active and mainstream rock charts. The band opened for the Rolling Stones in France and in Canada. Watching Mick Jagger âstrut his stuffâ backstage was memorable, according to Brett, but he was nervous for his performance.

âI put too much pressure on myself,â he says. âI was nervous but glad the experience is behind me. Now theyâre coming into our backyard, and it has softened my nerves.â

Brett is the bandâs lead singer, and he is also a songwriter. His two loves include writing and rock ânâ roll.

âPeople attach themselves to a song they can see themselves in,â he says, explaining his writing process. âThe stories I write arenât over complicated. Theyâre simple, but from heartfelt brutally honest lyrics, that gives something for people to latch on to, to dissect and carry around with them.â

Due to AC/DC being his favorite band and most important musical influence, Brett mistakenly believed all songs needed the word âhellâ in them, such as âHighway to Hell.â

âAC/DC was my first love,â he says. âThen I discovered Bruce Springsteen and Jackson Browneâs songwriting. It showed me that my lyrics didnât need to be all hell-to-the-world songs. It could take you any place where you wanted to go.â

Brett says the band sticks together, and that is an outcome of six years on the road performing at Canadian venues to ânobodyâ and not stepping on one anotherâs toes. Now that they play larger venues, they enjoy appreciative fans.

âTo be 4,000 kilometers from home, people chanting our songs in Florida, itâs amazing and humbling,â he says. âI think weâre in a sweet spot in our career. Iâm not sure it gets any better than this.â

A favorite venue was in a small town near Toronto, when S.O.S was peaking on the charts.

âWe had a thousand people screaming our songs back,â he remembers. âIt was like a full circle moment because weâd built our fan base in small towns. It felt right to have all the people come out.â

The Glorious Sons and JJ Wilde open for the Struts on July 15 at Water Works Park Amphitheater. Tickets cost $25-$30, plus fees, and are available at eventbrite.com. ♦