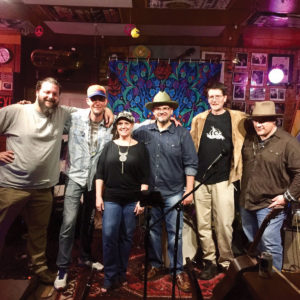 As a child, Jason Buns listened to his dad playing Buddy Holly songs
on his guitar. Jason didnât understand the importance of who Buddy
Holly was until later, when his dad explained the history.

âMy dad went to the Surf Ballroom for Buddy Hollyâs final concert
before his plane crash,â says Jason. âHe even had a napkin with the
musiciansâ autographs on it.â

The current band formed in 2016 and is comprised of members
scattered across Iowa including: Jason Buns, lead guitar; David Haas,
vocals; Dave Lumberg, bass; Steve Robinette, rhythm guitar; April
Wells, keyboards and vocals; and Eric Wells, drums and vocals.
One thing that sets the band apart is that all of the music played
are original tunes. The groupâs set list contains 100 songs from three of
their current albums and seven soon-to-be recorded albums.

âWeâre from the philosophy that weâve all played cover bands in
the past and have musician friends who make a living playing covers,â
he says. âItâs a whole other side to being in a band that plays original
music. Itâs sometimes a challenge for a listener who doesnât know our
music.â

As a result, the band chooses venues where live music is ânurtured.â

âWe try to play traditional venues known for live music. Bryonâs in
Pomeroy is a great place for a no-nonsense music venue, because thereâs
no football playing on TV or a pool table,â says Jason.

Writing and recording music is a âcoolâ process. The group
membersâ varied musical backgrounds, from classically trained to
bluegrass, lends to their success. Several albums were recorded in an
airplane hanger in Ida Grove, where a local patron of the arts, LaJune
Godbersen, allowed them to record music. The inside appears as a
Spanish grotto or a medieval castle and promotes creativity.

The band believes in its unique musical creations and hopes the
audience recognizes their enthusiasm.

âWe have the passion to see this project to a point where we know
we gave it our all,â says Jason. âWe want to keep playing music for as
many places and as many people as possible. Right now weâre having a
blast and love what weâre doing. We want our audience to feel the same
way.â