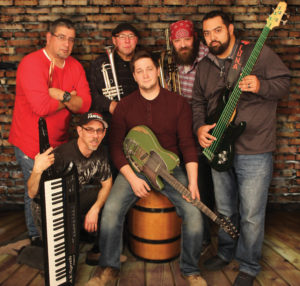 A popular horn party rock band, called the Punching Pandas, wants to clear up a few things about their name. No pandas are harmed during their concerts. The Punching Pandas donât advocate violence toward panda bears.

The bandâs name came during a brainstorming session. After putting up dozens of submitted names on a dartboard, they threw a dart to choose the bandâs name.

âWhatever we pick, we have to own it,â says Joe.

Four years ago, Punching Pandas originally started as a three-piece band. At one of their early shows, a patron stood up and started playing his trumpet. The band hired him, and within the next six months, added others to form a six-piece band.

The band plays rock and blues â a variety of party songs from Jimi Hendrix, Stevie Wonder, Bruno Mars, Green Day and more, with nearly 400 songs in its lineup.

âItâs easy to do more diverse songs because we have a horns section,â he says. âWe perform a variety of songs for varying age groups.â

The Pandas play nearly every weekend, performing at weddings, farmers markets and local nightclubs. Memorable venues include the Tipsy Crow, where the whole place was âliterally jumping,â and the Latitude 41 in Saylorville, which âresembled the Wild West.â

While performing for a nonprofit association ball, it surprised the band when a rowdy crowd packed the dance floor.
âWe thought it would be a bunch of stiff, boring people,â he says. âTurns out we were wrong.â

The band switches up the playlist to keep it fresh. Joe says, âOur song list is loosey-goosey. A lot of times we donât do a straight cover. We put our own spin on it. Iâm not an egomaniac. I let the band do their own thing.â

Family members are staples at the show, and Joeâs dad runs the sound.

âOur families are not like plants in the crowd,â he says. âTheyâre not first on the dance floor. Theyâre super supportive.â

Joe appreciates their fansâ dedication to showing up for concerts.

âThe only reason we do what we do is the people who come out to see and frequent the bars. Just going to a live show is unbelievably huge. Itâs a blast getting up on stage,â he says. âItâs not work for us. Itâs what we do for fun.â ♦