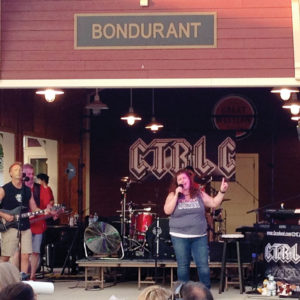 When the band Gimikk arrives at a venue to play a concert, they use a familiar football game strategy.

âWe do a no-huddle offense,â says lead singer James Brinker. âIf itâs a bachelorette party that just came in, we know they want to hear dance tunes. If we go to a certain Cedar Rapids bar, weâll bring out our southern rock tunes.â

Gimikk formed 20 years ago. The bandâs name was taken after the band played gigs wearing different hats. The founding members declared, âThatâs our gimmick â wearing hats to our show.â The spelling of Gimikk was changed to stand out.

Band members, who no longer wear hats, include Jimmi V on lead guitar, Cy âKickâ on rhythm guitar, Billy Sevenbergen on bass guitar and Josh Tilton on drums. No original members of the band remain.

Brinker joined the group in 2007 after several stints with local college bands âRenderedâ and âStruck by Lightning.â Since he was a kid, rock music has been his passion. His dad taught him to run his record player, and he spun his dadâs â70s collection.

âMy parents never once told me to turn it down,â he says. âI wasnât discouraged from whistling, humming or singing around the house.â

He played trombone in marching band and enjoyed performing all types of music. A turning point in his music career happened in 1991, when he emulated Queen in the âWayneâs Worldâ movie, which featured the song âBohemian Rhapsody.â

âWhen Freddie Mercury died and Queenâs song was on âWayneâs Worldâ â that was a big influence on me and my idea of what rock and roll was,â says Brinker.

âItâs a show, not a sit and clap where we just go through the motions,â he explains.

The band once opened for Hairball, which is in the same musical genre as Gimikk. But no matter how big the audience, the band goes all out.

âI donât care if itâs 10 or 10,000. Weâll smile and connect with the crowd. We want to be like a DJ who never stops but keeps playing tunes back to back,â says Brinker.

âI get to be the life of the party,â says Brinker. âIf weâre not loving it, we wouldnât do it. If you love music, what better way to perform it live? It beats the hell out of just listening to it.â ♦