Nothing abnormal about Abby Normal 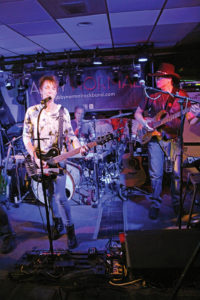 On a recent Thursday evening, an enthusiastic crowd gathered for Valley Junctionâs Music in the Junction. Guitarist Devon Miller donned a Viking hat and strummed his fiddle while singing âThe Devil Went Down To Georgia.â The crowd came alive, joining in and singing along as they danced, shoulder to sweaty shoulder, with hundreds of other regulars who came to see the band, Abby Normal. Next, Miller grabbed his Van Halen-inspired custom guitar and played âEruption,â followed by other fan favorites.

Abby Normal is a Des Moines-based professional cover band, Founders Jana West, Tim West and Dale Rupp started playing rock ânâ roll from the 1970s and 1980s in 2011, and they havenât looked back.

The bandâs name comes from a scene in the movie, âYoung Frankenstein.â Dr. Frankenstein asks Igor whose brain was taken from the jar and put in the monster, Igor replies that it was abnormal â âAbby Normal.â

âWe wanted a name that hinted at a female element, since the lead singer, myself is female,â says Jana West. âWe also wanted some humor.â

The group recently added Miller, a guitarist and singer from Standing Hampton. Rounding out the band is Park Mikels playing the keys.

The group plays several times a month, with outdoor festivals as a favorite. One of its greatest performances was for the RAGBRAI crowd in 2014 in Clear Lake.

âWhen the ocean of riders sang along with âI Love Rock ânâ Roll,â â remembers West, âI swear they were as loud as the band.â

âWe try to stay true to our original goal â playing songs people know well,â she says. âWe look for songs for the âHell, yeah!â factor, or a song that fans say, âThis is my favorite song.â â

West, along with her husband and bandmate, Tim, have also released five albums with original music. She feels the Des Moines music scene is talented and experienced a growth spurt, due in part to the cityâs investment in embracing the arts.

Abby Normal compares its concerts to an arena show.

âNo way are you going to get this up close and personal at a Bon Jovi concert,â West explains. âBut you still feel the front row energy of a live band. You can dance, let your hair down and relive past memories.â ♦