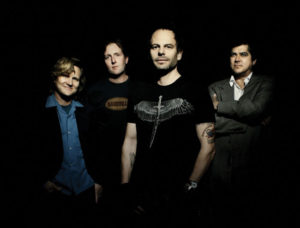 When the Gin Blossoms return to central Iowa to play a Nitefall on the River concert, itâs like coming home for one of the band members.

Johnson explains that his parents attended Drake University, where his mom played piano and his dad sang in the choir. His family lived briefly in Des Moines, but ended up in Denver, where Johnson was born.

Johnson says he âlovesâ Des Moines and is excited to perform in the outdoor amphitheater for the July 10 concert.
Gin Blossoms, a popular band in the early â90s, landed four top 40 hits from their 1992 album, âNew Miserable Experience.â They earned a Grammy nomination for best duo/group performance with songs such as âHey Jealousyâ and âFound Out About You.â

Their music is not necessarily pop, rock or alternative; itâs considered âjangle rock.â

Johnson laughs when he clarifies his musical genre definition.

âWe call it jangle rock,â he says. âWhile one guy plays the rock chord, another is playing an arpeggio â or high G-chord.â

The band invents other descriptions, too. Johnson describes their music as âsweet and sour.â

âItâs a term we came up with,â he says. âThe melody is nice, but the lyrics are edgy.â

One example is a tune on their new âMixed Realityâ album, released on June 15. The song âThe Devilâs Daughterâ contains explicit language about âIâm coming over drunk and hornyâ to a melody your mom could be humming.
Johnson says the albumâs name reflects a âmixed bagâ of creative songwriting, where all four band members helped write the new album.

âThat doesnât always happen,â he says. âEveryone got a chance on this record.â

Johnson likens the bandâs long-term relationship to a family with a love-hate relationship â the band formed in 1992 with a hiatus from 1997-2002.

âI have four brothers, so itâs easy for me to slip in the mode of a bunch of guys hanging out,â he says. âOver the years, weâve had different views, but we get along anyway.â

Johnson says the fan base is the same from 25 years ago, but older â just like the band.

âPeople must like our songs,â he says. âWeâre fortunate our songs are well written and stand the test of time. Lots of hits disappear and never come back.â

For the upcoming Nitefall on the River show on July 10, Johnson promises to play his bandâs fan favorites.

âWe donât want to kill everyone by playing all new songs,â he says.

e recounts a time, between sets at a concert, when he sat with a buddy in the audience. Fans approached, asking for a selfie with him.

âThey recognized me, and Iâm totally cool with that,â he says. âI love to chat and see what people are about on a personal level.â

Dan Tedesco is the opener for the Gin Blossoms concert at the Simon Estes Amphitheater on July 10. Tickets run from $20-$25 and are available from Ticketfly. ♦