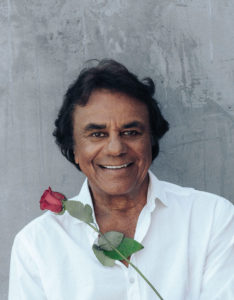 The Who, Rolling Stones, Neil Diamond and Johnny Mathis all have something in common â theyâve toured for 50 years.

Johnny Mathis, 82, surpasses that by a decade. Heâs in his 62nd year of touring and brings his âVoice of Romanceâ tour to the Des Moines Civic Center on May 13 at 7 p.m.

Mathis began touring in his 20s, as a way to promote his new record. He hasnât stopped since and hopes to continue performing for as long as possible.

âI donât think about it (stopping) unless I canât do it. I love to sing. I have the opportunity to sing after all these years,â says Mathis, talking from his home in Burbank, California.

He keeps his singing fresh by learning new and interesting songs. However, each show consists of crowd favorites, such as âMistyâ and âItâs Not Fair For Me to Say.â

Mathis has recorded 78 albums, including his latest, âJohnny Mathis Sings The Great New American Songbook.â He says of the album, âI guess people like to listen to me sing other peopleâs songs, too.â

Mathisâ concerts donât have an opening act, but that wasnât always the case. Years ago at a concert, the promoters wanted an opening act, over which he had no control. One time, the audience got anxious and rowdy.

âThe audience had a conniption and started rioting, throwing chairs at the opener,â he explains. âFrom then on, I decided I would come right up front first and start singing without any fanfare.â

Heâll sing for about 40 minutes, and then a second act entertainer, âusually a comedian to lighten the mood,â will perform, followed by an intermission and then a return to the stage.

Mathis used to ask the audience what they wanted to hear, but after listening to fans shouting out hundreds of requests, he refrains from doing that.

âBig mistake,â he says. âI learned my lesson. Now I try to find out ahead of time what their requests are.â

Mathis credits his musicians adapting to impromptu set changes. His guitar player, a âgood pal,â strummed with him for 40 years.

âItâs nice to have the support of my pals â such wonderful musicians. They can play anything Iâve ever recorded,â he says. âIâm amazed I can remember everything I recorded after all these years.â

Mathis is modest when it comes to being a star celebrity whom fans adore.

âBasically Iâm just a singer,â he says. âTo have the support and acceptance of the musical world is quite flattering.â ♦