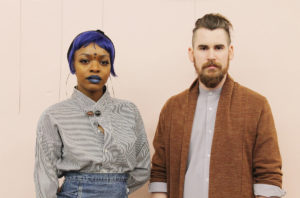 In the days of social media and over-sharing, Ancient Posse stand out for their secrecy. The duo â Steven Bergeron (keyboards and vocals) and Kamillah JonaÃ© (vocals) â donât like to discuss the bandâs origin story, except to say they began making music together in 2014. They wonât reveal how they landed on their band name, but allow that it is an anagram.

âMystery is an important ingredient in a lot of art,â Bergeron says. âWe definitely wanted mystery.â

âWe spent three years writing and not showing anybody our stuff,â she says.

â âI got this cool secret, canât show you just yet. One day!â â

âThere were at least three times in those three years where you (JonaÃ¨) were like âAlright, letâs go show everybodyâ and Iâm like âNo, we canât,â â Bergeron says.

Eventually Ancient Posse played their first ever show at the Vaudeville Mews at the end of 2016. Since then the band has been on an upward trajectory rarely seen in Des Moines. A year after their first show, the pair played at 80/35 in 2017, then the inaugural Street Heat Festival over Labor Day Weekend 2017, an IPR Studio One Underground set in February, the Des Moines Music Coalitionâs Backstage Ball last month and are set to play Mission Creek in Iowa City in April and Hinterland in August.

âItâs really cool, checking off all the awesome opportunities that there are here and doing them,â Bergeron says.
Their impressive resume is made all the more impressive by the fact that they are yet to release their debut album. The only morsel of the breadcrumb trail so far is their video for âWindlessâ on YouTube, with their debut album set to drop in late summer/early fall. While their well-curated Instagram labels their sound as âsynth, soul, pop,â the two say itâs more complex than that.

âI canât put ours in a genre; itâs kind of a combination of things. Iâd say itâs soul rattling and inspires you to feel and move,â JonaÃ¨ says.

âIâm excited for people to put a term on it,â Bergeron adds.

Whatever labels they may attract, they unanimously agree it falls in the category of electronic music.

âI think itâs the future, and we should embrace it,â JonaÃ¨ says of skeptics.

âWeâre playing real instruments; sounds are just made not by a vibrating string, but itâs still real. Thereâs still a stigma even though electronic music has been around for 40 years or more,â Bergeron says.

For their eclectic style of music, both band members agree theyâre largely inspired by pop music.

âI think pop music gets a lot of hate, but weâre inspired by BeyoncÃ© and Lorde as much as anybody else,â Bergeron says.

âI grew up listening to the radio, so pop music is my go-to when it comes to writing melodies, and when I get into songwriting. Instinctually, thatâs what I know. That, and R&B and hip-hop,â JonaÃ¨ says. ♦