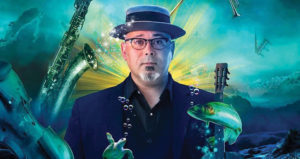 Heath Alan â founder, singer and songwriter of the Heath Alan Band â got his start, and found success, in music early on in life. Alan plays a number of instruments, including saxophone, guitar and piano. However, it was the saxophone that took him places.

Alan played sax in the high school band in Cedar Falls, primarily classical music. When he was 17 years old, his musical talents led to a sponsorship with Yamaha International from 1990-1993 â as part of its youth program â and provided him with equipment. While playing a show for Yamaha in California, he gained the attention of the Liberace family (yes, that Liberace), and they awarded him the Liberace Music Grant. Alan remembers being flown out to Las Vegas and having fancy dinners at Liberaceâs mansion. Liberace had died by then, but Alan did meet his family and work with Liberaceâs brother.

âI got a lot of attention early. I love to play music, I really do. I know more tricks now, flashy stuff. But I think I could probably play just as well now, if not better,â Alan says.

As part of the Liberace Grant and Yamaha sponsorship, he played saxophone shows that gained him more exposure â including Carnegie Hall in New York City â and eventually led to him receiving a full-ride scholarship to play saxophone at UNLV.

For all of Alanâs accomplishments, one would not know it upon meeting him. He is humble, soft-spoken and politely brushes off labels like âwunderkind,â claiming heâs no more talented than anyone else. He is simply a man that is happy to play the blues and spread his favorite genre of music.

After graduating from UNLV, he moved back to Cedar Falls, which led to an opportunity to play saxophone for the storied Bob Dorr and the Blue Band and was Alanâs gateway to the blues.

âItâs such a real tangible thing for people to experience, and feel and engage in,â he says about the blues. âOf all the musical genres, I think itâs the most honest.â

About 15 years ago, Alan moved to Des Moines and formed the Heath Alan Band. He has been writing songs and playing the blues locally ever since. The band has played at many local venues, including the Civic Center and Hoyt Sherman. Alan estimates he plays about 100 shows a year.

âI tried to emulate both male and female styles in my singing. My mom was playing mostly women singers in the house, so they had the biggest impression on me early on,â he says.