They donât care what you think 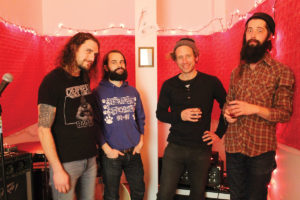 âWe donât give a fuck what really anybody has to say,â Vahnevants bass player James Brittenson says.

Since their first release in 2014, the four-piece 1960s garage rock band (the band name is a mashup of its foundersâ and primary songwriters â Micah Sturdevant and Jared Vaughan â last names) has released a handful of cassettes, with the most recent being their June 2017 release âVahnevants are Criminals.â The inspiration for the album title came from an unlikely place: bathroom graffiti. The words were scrawled in black marker, written in all caps and large letters across a red wall in the menâs bathroom at The Octopus in Cedar Falls.

The band liked it so much it inspired them to turn it into a sticker and an album title. Brittenson created all the artwork for the latest album. He is also co-president of Rule_OG_Y, which released the tape.

âAnything artistically that I do is very collage oriented. Early 1980s New York street art and whatnot, a lot of my influence comes from that stuff,â Brittenson says.

Brittenson and Sturdevant lament the bygone era when album artwork was a highlight when purchasing music, and feel it has been forgotten in the digital age.

âIt just bugs me the way people release stuff. I find it important to make sure youâre really getting a full-fledged product,â Brittenson says.

The âVahnevants are Criminalsâ cassette has art on both sides of the tape and also comes with an insert, explanation of the album and digital download card. The 10-song release includes four songs that clock in under one minute, each of which is named after is respective track number.

âThat part is all you need. It serves its own purpose,â Brittenson adds.

âItâs hard to do live sometimes. People are like, âIs it over? Is it done?â â Sturdevant laughs.

As much as they care about album art, they care very little about how their live shows are received.

âAt the end of the day, my main concern isnât necessarily making the people in the audience satisfied with my product. Itâs about making myself happy with what Iâm doing,â says Brittenson.

âWeâve played shows where we play half-speed, and everybody hates it,â Sturdevant adds.

Of even less concern to the band is the number of attendees at their shows. Brittenson and Sturdevant recalled a recent show where only a handful of people were in the audience.

âJaredâs parents were there, and two kids I donât think Iâd ever seen before were there, and that was probably one of my favorite shows Iâve ever played. I felt like everything was just perfect,â Brittenson says. âAs far as numbers go, itâs such a superficial thing. Either people will come out, or they wonât come out. Iâm not going to pout about it.

âA lot of times we play to about 20,â Sturdevant smiles.

Catch the Vahnevants, or donât, at the Vaudeville Mews twice this month. First on Jan. 8 then on Jan. 21. ♦