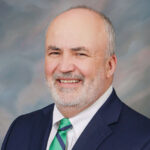 In fact, Carlin, a state senator from Sioux City, who is challenging the venerable Grassley in the GOP primary, says many Iowa Republicans are tired of Grassley, who has served in public office since 1959, the end of the Eisenhower administration. Carlin says he can knock Grassley out in a primary.

âThe whole reason I got into this thing is I asked myself last year, âAre my grandkids free in 20 years?â â Carlin said in an interview with this newspaper. âThe answer to that question for me was âno.â â

A big reason: passivity from establishment Republicans who arenât willing to fight for liberty, Carlin said.

âSenator Grassley is one of them,â Carlin said.

Two other reasons: threats from China and Big Tech.

The political class in the United States and Iowa specifically â in both parties â ignored the threats of unchecked globalism and greed, Carlin said, spotlighting that as a primary reason for rural retail and manufacturing decline in Iowa.

âWe got here because U.S. multinationals drove the agenda where their manufacturing base, because of our high corporate tax rates and other things, look for friendlier pastures in China and India and Pakistan and Mexico,â Carlin said.

Today, China is the biggest threat to the United States, he said, adding that China has modern-day slavery that allows that nation to out-compete other countries on wages and cost of production.

âMany of our corporations left American soil and went there,â Carlin said. âThe politicians facilitated it. And now we are in real trouble. We have created an enemy more daunting than anything we have ever seen before â I think more daunting than the Soviet Union.â

Carlin said he will support policies to repatriate the American manufacturing base, to bring jobs back from China and other places.

There are differences within his own party on how to approach China.

Former Gov. Terry Branstad, ambassador to China under President Trump, started a consulting operation, the Branstad Churchill Group, to provide âadvice, guidance and solutions to organizations, corporate leaders and investors seeking to navigate the challenges and opportunities associated with conducting business in China and the United States.â

What does Carlin think of that move by the former Iowa Republican governor?

âIt isnât something I could do,â Carlin said.

Carlin said he needed to learn more about what Branstad is doing before he comments further.

âThere is a very foreseeable intention to get more aggressive,â Carlin said. âThis is the same country that produces 90% of the worldâs drugs. If they were to cut off the drug supply, our hospitals would be shut down in two weeks.â

Then there are Big Tech companies like Facebook (now Meta), which are also major threats to American democracy, Carlin said.

âI believe Big Tech is an existential threat to the future because they consciously have a platform that they have created to addict people, to addict children, and then they develop a database to study how to manipulate these same people into their adult years,â Carlin said.

Should Big Tech be reformed by the U.S. government or torn apart?

âThey absolutely have to break it up,â Carlin said. âJust because you donât put someone in a cage does not mean you are not controlling them. If I can addict you to something and feed you my narrative all the time, jeez, that is a cage.â

Carlin is also concerned about the loss of privacy at the hands of Silicon Valley.

âThere is no privacy anymore,â Carlin said. âThese cellphones and these platforms know the most intimate things about peopleâs lives. Iâve had conversations with my wife about fixing something in the house and I get an ad for that thing two hours later. And I am not on the phone, Iâm not on the computer. I just have a phone on the counter.â

âThe interests of the campaign might be better served in Des Moines where you are going to get more media exposure,â Carlin said.

In Grassley, Carlin faces a Trump-endorsed incumbent who is something of an Iowa institution.

âWe have with us tonight a great American patriot, a man who truly loves Iowa â loves Iowa,â Trump said of Grassley at an Oct. 9 rally at the Iowa State Fairgrounds in Des Moines. âHeâs a young â very young guy. Heâs strong. And heâs very handsome. He fights like no other. When Iâve needed him for help, he was always there.â

Carlin, who was also at the Des Moines Trump rally, says not everyone there cheered for the Trump-Grassley moment.

âI donât know if you heard the boos when he announced that endorsement, but I did,â Carlin said.

Many Iowa Republicans are angry with Grassley for voting to certify President Joe Bidenâs election and supporting a generational infrastructure bill, Carlin said. Carlin says he can win over those voters.

Thereâs another group within reach for Carlin â Iowans who oppose vaccination mandates, he said. Carlin said he is fighting for choice on vaccination.

Is he vaccinated against the coronavirus?

Carlin does some medical malpractice and says he has two friends who died from blood clots to their brains after receiving vaccinations.

âPeople have legitimate concerns about risk,â Carlin said. âMy thing is, if there is risk, there should be a choice. You canât force that on people.â

Former President Trump received a COVID booster shot and promoted it. Was he wrong?

Carlin is also a longtime opponent of abortion who has crafted legislation to limit it.

With the potential for abortion being far more limited or even illegal, what does Carlin think the penalty should be for a woman who secures an abortion or physician who performs one?

âThatâs a fair question,â Carlin said. âCriminalizing it would largely go to the physician and the sanctioning of their license â probably making it a felony.â ♦