Defund the police? âWe have no job for them to do,â says rural U.S. Senate candidate

Democratic U.S. Senate candidate Dr. Glenn Hurst said Iowans need only look at his small city of Minden to see life in a defund-the-police environment. Echoing the sentiments of many calling for major reforms around the nation â and slashing or reallocation of police budgets â Hurst, a Minden City Council member, said the southern Iowa town should prioritize mental-health and other social services over traditional law-and-order policing. 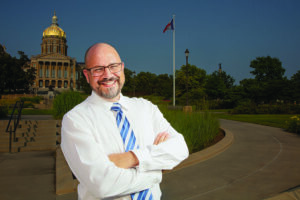 Glenn Hurst is a candidate for the U.S. Senate.

Whatâs more, the argument over cutting police spending should be âhumorousâ to rural Iowans because many of them already live in âdefundedâ police towns.

âWe already exist without significant law enforcement,â Hurst said in an interview. âWe already exist without that, and the day-to-day policing that police are doing could be better directed toward mental-health services and social services. Busting meth labs, thatâs not day-to-day crime in our communities. We donât contract with the sheriffâs office because weâd like them to come into town and find all of our meth labs. We contract with them to give a presence to protect and serve, not to investigate and enforce.â

Communities like Minden largely work on the honor system and self-policing, Hurst said.

âPeople who move out here tend to be good, law-abiding citizens, and we check one another,â Hurst said. âIf the grass is too long in my yard, my neighbor tells me about it. If the car is parked on the street in front of my place too long, the neighbor comes and talks to me about it, or I get a call from the city clerk.â

Hurst, who is seeking to run as one of the more-progressive candidates in a growing Democratic U.S. Senate field, said the angry response to the âdefund-the-police movementâ is âalmost humorous.â

The Pottawattamie County Sheriffâs Office has a contract to provide law enforcement services in Minden, a town of about 600 people, and many other small towns in the county.

âWe have no job for them to do here in terms of policing,â he added.

The sheriffâs office averages 25 to 50 calls per month in the city, he said.

That considered, the city is close to Interstate 80, and officials respond to drug-related crimes and other major concerns there, he said.

âMinden gets a lot of calls being on the Interstate,â Theulen said. âYou get normal bizarre stuff that comes off the Interstate.â

For his part, Hurst said people in rural Iowa want to see a prioritizing of mental-health and social services.

âWe donât need the police to come arrest the guy whoâs staying in our hotel who is sleeping in his own urine and feces because his illness and mental illness is so bad that he canât bring himself to leave,â Hurst said. âWe need social workers.â

Should there be law enforcement that goes to deal with somebody who is potentially violent in a hotel or motel?

âNo, absolutely not,â Hurst said. âThere should be mental-health care. There should be social services that go in. If weâve reached the point that law enforcement is necessary to address that problem, weâve failed as a society and as a community â and thatâs why Iâm running, is to address those failures that are killing our rural communities.â

âNo, I didnât say that at all,â Hurst said. âI said that it is a far-lower priority than providing the services of mental health and of social services.â

Canât Minden do both?

âYou tell me,â he said. âYou write about crime and social services. How are we doing in preventing crime?â

âThere is still a need for law enforcement,â Theulen said. ♦