Grassley may seek 70 years of consecutive political office in Iowa 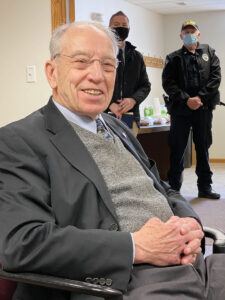 U.S. Sen. Charles Grassley, R-Iowa, speaks with agriculture professionals and the media during a February event in Jefferson. Photo By Douglas Burns

At age 87, U.S. Sen. Charles Grassley, first elected to office during the Eisenhower administration, smiled broadly when pressed by audience members about a potential re-election campaign next year in a town hall at Landus Cooperative in Jefferson recently.

âI can do 20 right now,â Grassley said, referring to push-ups.

The senator said he would make a decision in a matter of months on whether to seek an eighth, six-year term in the Senate in November 2022. If Grassley does run, and wins and lives through inauguration day on Jan. 20, 2029, he will, at age 95 (heâd turn 96 later that year), have served 70 consecutive years in public office as he was sworn into the Iowa House on Jan. 12, 1959.

âI like my work,â Grassley said, telling this newspaper later that he would not reveal at this point whether he is leaning for or against another bid for office.

But he gave me that cagey Grassley smile after a long pause. Heâs running.

Grassley has been in office since he was 25 years old.

There are, of course, two ways to look at this. First, for much of the last century, politics has been a pursuit of seniority. That is changing. But Iowa-boosting ag policy no doubt has benefited from Grassleyâs marathon service, not just because of plum committee assignments and rank, but due to the large alumni network of former Grassley staff populating key institutions in and around government.

At the same time, in a state of 3 million people, it seems like a colossal missed opportunity to give one of our citizens that much sway, a time-bending, sprawling platform of power. How many other Iowans with different life experiences and ideas were locked out of service for us in the Senate or opted to move on from politics because Grassley had his foot jammed in the doors of their ambitions?

At the end of the day, the voters went with the first line of reasoning. Grassley stood for election, campaign after campaign, and carried the day.

The feat of political endurance heâs considering would vault Grassley past his late colleague. U.S. Sen. Robert Byrd, a West Virginia Democrat, who served in the West Virginia Statehouse, U.S. House and Senate for a total of 63 years straight. Byrd died in office in 2010 at the age of 92. The late Democratic Michigan Congressman John Dingell served in Congress from 1955 to 2015, a record, but Dingell had no earlier state-level offices, meaning heâs behind Byrd and Grassley in total public service.

At age 51, and feeling like something of the gray-haired veteran myself as contemporaries of mine have left the beleaguered newspaper business, I have covered Grassley for 32 years. Thatâs not even half of Grassleyâs current career in Iowa politics, and I am often the oldest journalist in the room these days.

To get a sense of Grassleyâs tenure, you have to look to monarchs really. Queen Elizabeth IIâs reign has lasted since 1952. If she dies this year at age 94, that will make 69 years as monarch. Grassley is poised to pass the queen. Heâs already in the territory of the late Franz Joseph, the emperor of Austria for 68 years, from 1848 to 1916.

Iowaâs senior senator may be the healthiest 87-year-old Iâve ever encountered. Heâs a walking monument to all those life-lifting ditties from Benjamin Franklin to Brene Brown.

First, Grassley has never had a beer. Ever. And I believe him. Heâs told me this in person at least three times.

âI am probably the wrong one to ask, because I have never tasted beer,â Grassley said, when queried a few years ago about whether Iowaâs universities should serve alcohol in football stadiums.

Heâs also led a stable farming life and missed out on a lot of relationship anxiety, the stuff of other menâs heart attacks.

Back in October 2017, following another event in Jefferson, I asked Grassley about the then just-unfolding furor surrounding reports of Hollywood mogul Harvey Weinsteinâs then-alleged track record of sexual assault and harassment.

âIâve only slept in bed with one woman my entire life. Does that answer your question?â Grassley said.

Chuck Grassley is so square that, historically, he balances out both Ron Jeremy (on the sex) and Frank Sinatra (on the drinking, and the women, too.)

At the Landus meeting recently, Grassley and a former staffer joked about his 5:30 a.m. runs. Generations of staff members would accompany him on those â and smart media people would know who was running and when.

Hereâs some advice for all those Des Moines insurance companies on Grassley: Throw out the actuarial tables. Cat Daddy Chuck defies the odds. The senator runs again and makes it to 70 years. As for 2028? Donât count that out, either.

U.S. Sen. Joni Ernst, R-Iowa, ruled out a potential run for the presidency in 2024 on Feb. 18, saying she just won reelection and is currently suited for the Senate.’

âI rule it out totally, I do,â Ernst told Political Mercury in Glidden. âWhy not? I guess because I just won my second term in the Unites States Senate. I am so committed to the United States Senate, and I just think that I have a lot to accomplish in the Senate yet.â

Ernst, who spoke with the media after a forum on child-care in Glidden, said as she gains more experience in agriculture and military policy, key interest areas for Ernst, she can become more effective in Congress. Ernst, 50, had been on former President Trumpâs short list for vice presidential running mates in 2016.

âI just feel really good about where I am and the influence that I have in the Senate,â Ernst said. âAnd I think right now it is best for me to be in the Senate working for Iowans. This is the state I love. This is the people I want to work for so I think this is the right position for me now.â

Ernst said she expects a large field of candidates to campaign in the Iowa Caucuses for the presidency. The senator said she has no preference about whether Trump seeks a second, non-consecutive term in the White House.

âI am excited about the potential we have for so many up-and-coming Republicans we have running in 2024,â Ernst said. âIâm not sure where President Trump fits into that. I think that if he is driven and has base support in 2024, that is something he could look at. But I will just say I think there is really a lot of exciting people out there.â

Trumpâs role in the future of the Republican Party might not be as a candidate for office himself, Ernst said.

âCan he be an influence on the 2024 race? He could do that without actually being a candidate, but that will be up to him,â Ernst said.

Ernst said it is too early to throw her support, rhetorically or formally, behind Trump or any other possible GOP contenders for the Oval Office.

âI donât have a preference right now, but I just have so many friends that I think will be engaging in the 2024 election, and Iâm excited about their opportunities,â Ernst said. ♦