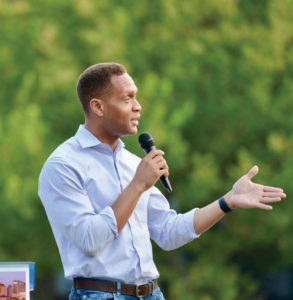 Linn County Supervisor Stacey Walker says Iowa has work to do in the area of dismantling systemic racial oppression in order for the state to move forward. Submitted photo

Many white Iowans involved in urgent conversations on race in the Hawkeye State digest observations and challenges to institutions â business, political or educational â as insults to them personally, an attack on their whiteness, a reflex that stalls and complicates change, says Stacey Walker, one of Iowaâs ascendant young political leaders.

Walker, 32, an African-American Linn County supervisor and oft-mentioned candidate for future higher office, has been a man in an intense moment in history as he works to improve race relations in Cedar Rapids, Iowaâs second-largest city, while advising Democratic presidential candidate Joe Biden more broadly on matters of community and justice.

Political Mercury talked with Walker, a Democrat, in his Cedar Rapids office for about an hour on a recent Friday afternoon. The three supervisors in Linn County serve in full-time capacities.

What should white people understand about the African-American experience in Iowa? What does Walker think needs to change to improve the lives of Black people in the state?

âWe are talking about systems; weâre not talking about any one individual,â Walker said. âWhat Iâve found since coming to office here, and working at a lot of this work that gets at the systemic issues we face, is that when I talk about white privilege and I talk about systemic oppression and structural racism, a lot of individual white folks take that really personally, as if I am accusing them or accusing the people they know and love of these things. And thatâs not necessarily the case, although I think a lot of folks in this state carry implicit bias. All of us do.â

Many Iowans belong to institutions that started with racist underpinnings, and it takes a recognition of that fact before change can occur to make them more inclusive â which is vital for Iowa as a small state that canât afford to leave any citizens behind, Walker said.

Walker worked the phone before and after the interview to organize citizensâ and local government response to calls for change in the wake of George Floydâs death at the hands of police in Minneapolis.

âThe reaction to George Floyd is obviously a reaction to an egregious criminal event,â he said. âItâs also a reaction to centuries of systemic racism, systemic oppression. I try not to judge people based on their expressions of anger and their cries for justice when theyâve been oppressed in that way for hundreds of years.â

Walker said the civil rights movement of today is more global than it was in previous generations.

âI think weâre one month out from the George Floyd murder, and we are seeing marches in Paris, in Dublin, in Tokyo, all over the world,â he said. âThe developed world has come together to say something is wrong, something has been wrong for a long time, and weâre standing in solidarity with people of color who are being murdered and have faced systematic oppression in America for centuries.â

In some respects, Walker sees this as a realization of Malcolm Xâs vision to hold the United States accountable for its history.

âHe wanted the developed world to indict the United States for crimes against humanity,â he said, adding, âI think Malcolm X got there a little faster than Dr. (Martin Luther) King in realizing the plight of Black people across the world.â

In terms of the rural-urban divide in Iowa, Walker is well aware that, as Cedar Rapids and Des Moines and the suburbs grow at a head-spinning rate, much of rural Iowa is hollowing. It troubles Walker, who said both rural Iowa and the stateâs minority population donât get enough support in terms of resources and attention.

âIf Iowa wants to matter going into the future, itâs going to have to address that, because our current method of operation is not sustainable, and it will not attract the kind of talent we need to be competitive,â he said.

In his own hometown of Cedar Rapids, Walker, a University of Iowa alum, takes issue with a popular, showcase neighborhood â New Bohemia, and the featured NewBo City Market and its variety of artisan and food vendors.

Many African-Americans are priced out of New Bohemia, which is blocks from where Walker grew up, he said.

âThere is a way we can do development that is more inclusive,â Walker said.

Big picture, Walker sees the election of an African American or person of color to Congress or the governorâs mansion in Iowa as another step in a continuum of progress tied to the 2014 election of Republican Sen. Joni Ernst to the Senate and GOP Gov. Kim Reynoldsâ election in 2018.

âIt was awesome that Iowa had a woman governor; it was awesome that Joni Ernst was able to break the glass ceiling that existed for federal office here,â Walker said. âObviously, I donât agree with their politics, but I can recognize the importance of that kind of diversity. We have yet to make similar strides with people of color in this state, and that is obviously very important.â

If the Iowa Democratic Party has an eye toward the future, it will be better at supporting minority candidates up and down the ticket, said Walker, who considered running for the U.S. Senate this year.

His near start for the Senate bid, and decision to wait for another opening, is not just about timing, the Linn County supervisor said.

âIt also speaks to structural issues within the Democratic Party,â Walker said. âThe party elites and the party resources flow to candidates who donât look like me. I was very candid with my decision not to run for the United States Senate.â

But he quickly noted that he is just 32.

âI see a little more mileage ahead of me,â he said. ♦