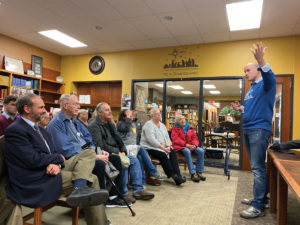 J.D. Scholten campaigns recently in Exira. The Democratic candidate for Congress thinks he can cut into Republican margins in rural Iowa. Photo by Douglas Burns

J.D. Scholten â an Iowa Democrat who rose from obscurity to national prominence with a near-miss challenge to U.S. Rep. Steve King, R-Kiron, two years ago â has filed nomination for a second run in the sweeping, 39-county 4th Congressional District.

Scholten, 40, a former minor league baseball player from Sioux City, faces no primary opposition. King is in a five-way race in the June primary, although early polling shows the veteran conservative congressman with strong margins against his Republican opponents.

âItâs a unique race in the fact that itâs probably the one race in America where the incumbent has a primary and the challenger doesnât,â Scholten said in a phone interview with this newspaper as he filed. âWeâre out here just building and waiting to see who weâre going to face.â

In recent weeks, Scholten stopped in Exira, and later Dedham, where he drew a crowd of 20 at the American Legion. Itâs part of the Democratic congressional candidateâs âDonât Forget About Usâ tour in which he hits communities of fewer than 1,000 people. Scholten sees the early campaigning as vital to getting past the 3-point margin by which he lost to King in the last election.

âWe created this grassroots movement here in western and northwest Iowa that not too many saw coming,â Scholten said.

He added, âA lot of people thought it would take two times to beat an incumbent like that.â

Scholten said the support at the beginning of the campaign this cycle is ânight-and-dayâ different, as fundraising and policy backing is coming quickly.

Scholten said his issues would be âfix, fight and secure.â

âItâs fix health care, fight for an economy that works for everyone and secure a democracy by cleaning up the special interests that are dictating things out in D.C. these days,â Scholten said. âThat goes from stopping in these local towns and seeing a donation box (for health care costs) to all these grocery stores that are struggling in these small towns to survive.â

Scholten said one major improvement in his campaign will be his own greater fluency on agricultural issues, as he has spent three years in regular day-to-day involvement with farmers and rural issues.

âThe more you talk to farmers, the more pain you feel,â Scholten said. âThe more you look at whatâs happening in D.C., the policies dictate almost everything in agriculture. The No. 1 thing I try to work with folks on is that we need to enforce our anti-trust laws in agriculture.â

Scholten said he consulted with several of the Democratic presidential candidates on rural policy.

Scholten supports Sen. Mitt Romneyâs plan to send a one-time, $1,000 check to every adult American to buoy the economy during the coronavirus outbreak.

Scholten also backs even more aggressive temporary-income-boosting legislation proposed by U.S. Rep. Ro Khanna, D-California, and U.S. Rep. Tim Ryan, D-Ohio, to provide a check between $1,000 and $6,000 to every American who earned less than $65,000 last year. More than three-quarters of American workers would qualify for this tax relief.

âWe need to get cash into peopleâs hands right now,â Scholten said in a follow up email. âItâs short-sighted for us to encourage workers to stay home if we know weâre leaving them without options to pay the bills and keep a roof over their heads.â

Americans most likely to be impacted by the public health crisis â including hourly workers, independent contractors and gig workers â would get a much-needed emergency boost during an economic downturn with the checks, Khanna and Ryan have said.

Scholten agrees because thatâs what heâs hearing around western and central Iowa.

âJust a few days ago, I talked with a trucker whoâs self-employed,â Scholten said. âIf he and his wife canât work, they canât put food on the table. Thatâs why Iâm fully supportive of Ro Khanna and Tim Ryanâs proposal to give between $1,000 to $6,000 to folks who made under $65,000 last year â folks like that trucker and his wife. These are the people who are feeling the brunt of this crisis. While I believe we should be targeting assistance to those most in need and not the Jeff Bezoses of America, I would also be supportive of Sen. Romneyâs proposal to give every American $1,000. The bottom line is that these proposals would be extremely effective at stimulating the economy while keeping Americans safe and healthy.â ♦