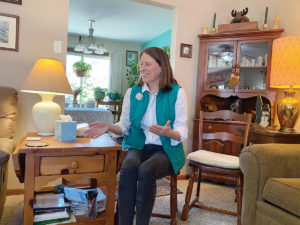 Democratic candidate for U.S. Senate Theresa Greenfield campaigned across western Iowa in recent days. She met with voters in restaurants and homes and other venues. Photo by Douglas Burns

Win or lose, primary or general, Des Moines businesswoman Theresa Greenfield rolled off one of the better observations about small-town living Iâve heard, a comment that shows she understands the distinctions between our communities. We share values, to be sure, but life is different in Carroll than Creston, and residing and working in Algona is not the same as Cherokee.

Case in point: She uses a self-made restaurant guide of all counties to hit diners and homespun restaurants.

Greenfield â who describes herself as a âfeisty farm girlâ â grew up on a farm outside of Bricelyn, Minnesota, a town of about 400 near the Iowa border. Her high school class: 24 students.

The family raised row crops and hogs â and her dad worked as a crop duster.

âTo me, that was fascinating as a kid, watching my dad soar through the sky,â Greenfield said. âIt made me dream.â

âI loved growing up on a farm, what can I say,â she added.

Greenfield said her father was an early advocate for women and their roles in business, on the farm.

âMy dad always said there were no boy jobs and no girl jobs, just jobs that needed to get done,â she said.

In event after event, Greenfield, who went on to a business career in Des Moines with commercial real-estate and homebuilding, leads with haymakers on agriculture, suggesting U.S. Sen. Joni Ernst, the Republican Greenfield hopes to face in a general election, is not delivering for the Iowa farms on which she built her brand.

âShe rejects climate science,â Greenfield said in Carroll. âIâll tell you, everywhere I go, your neighbors around this state, there isnât a meeting I go to that people arenât talking about climate change and climate action.â

Greenfield said there is a man-made climate crisis and that global leaders need a âwoman-madeâ way out of it.

âLots of folks just recognize that this flooding weâve had in southeast Iowa and southwest Iowa, the 3-inch rains that come day after day, the increased temperature rates, that we are gonna affect our corn belt, the germination of seeds here,â Greenfield said.

For that reason and others, Ernst is no Iowa icon, says Greenfield.

She referenced a Morning Consult survey showing Ernst as the third most unpopular senator in the nation, behind only Maineâs Susan Collins, and Senate Majority Leader Mitch McConnell.

The question most asked of me in Iowa political circles: How is U.S. Rep. Steve King going to do?

While the Iowa caucuses reporting issues on the Democratic side were international news, some Republican news did emerge in our area.

House leadership stripped King of his assignments on the agriculture, small business and judiciary committees over concerns they have with what they see as racially insensitive remarks from King.

Segebart said he expects a reelection of King will force top House Republicans in Washington, D.C., to reconsider that move and seat King on committees again.

âI met them all,â Segebart said. âYou know what, take Steve out of the race, theyâre all good candidates. Theyâve all got the right conservative principles that we do, but in this case, Iâve known Steve King all my life.â

Thatâs the view of many Republicans in western Iowa. ♦