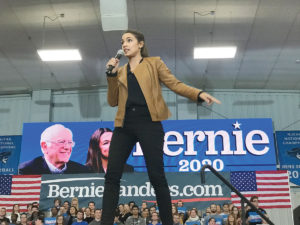 Rep. Alexandria Ocasio-Cortez, the youngest woman ever elected to Congress and a politician with an instinctive connection to younger and blue-collar voters, called for a âpolitical revolution of working peopleâ in a raucous rally for Democratic presidential candidate Bernie Sanders in Council Bluffs on a recent Friday night â one of the largest events of the 2020 cycle for any candidate in Iowa with a crowd of 2,400 people on the campus of Iowa Western Community College.

âWe donât watch the polls; we change the polls,â Ocasio-Cortez, a New York City Democrat, said in a 15-minute, unscripted speech from a stage in Reiver Arena.

The political superstar known as AOC for her initials was making her first trip to Iowa.

âThis is not a movie; this a movement,â she said in introducing Sanders.

Ocasio-Cortez, 30, talked about living the life of a bartender âslinging coffee in the morning and margaritas at night, really living this life.â She was still bartending in February 2018 as she mounted an outsider campaign for the ages.

âI wasnât making a living wage,â she said. âI didnât have health insurance. I struggled every month to make my rent. And I didnât feel like I deserved a good life because thatâs the script that gets told in our economy every day. This is just something that we take for granted. Itâs just how we lead our lives.â

The daughter of a housekeeper mother and smallbusinessman father, Ocasio-Cortez talked of living life at the economic margins without basic financial security.

âThis is the reality of America today, where we wake up and we feel like anything could happen,â she said. âWeâre one accident away, one car breaking down away, one diagnosis away from everything falling apart. There is no reason that, in the richest country in global history,
almost in global history, that we should be living like this.â

Sanders said no member of Congress has done more in a single year than his high-profile surrogate.

Ocasio-Cortez earned degrees in economics and international relations from Boston University and worked for a time for the late liberal icon U.S. Sen. Ted Kennedy of Massachusetts.

But solidarity means I fight for you, and you fight for me.â 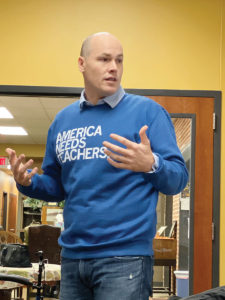 J.D. Scholten, the Democrat who narrowly lost to GOP Congressman Steve King in 2018, campaigned in Dedham and Exira, where he drew evening crowds of 20 and 30 people respectively, far more than  Democrats in those towns are used to seeing for congressional candidates this early in the election cycle, top local Democrats say. (Photo By Douglas Burns)

Sally Smith of Exira checked out two books from the Exira Library after joining more than 30 people in a crammed corner of the public lending facility in the downtown of this southwest Iowa city to hear congressional candidate J.D. Scholten make his case a year before the election.

One of the David Baldacci thrillers in her hand brings mystery to the monotony of her work life at Caseyâs General Store where Smith is both clerk and cook â for about $10 an hour, she says.

So Smith connected with Scholten â and his call to cut congressional salaries from $174,000 to the median income in the districts they represent â meaning the 4th Districtâs representative in Congress would make about $60,000 â the median income in the state of Iowa. The 4th District cuts across western and central Iowa, pulling in 39 counties.

The same spirit of fairness and equality should apply to health care for members of Congress, Scholten said, adding that his plan should be based on the coverage those in the military receive.

In recent days, Scholten stopped in Exira, and later Dedham, where he drew a crowd of 20 at the American Legion. Itâs part of the Democratic congressional candidateâs âDonât Forget About Usâ tour in which he hits communities of fewer than 1,000 people. Scholten, who narrowly lost to U.S. Rep. Steve King, R-Iowa, in 2018, sees the early campaigning as vital to getting past the 3-point margin by which he lost to the veteran Republican.

âIt is a great turnout, and I think where other people whoâve run against Steve King in the past, itâs been a one and done, and thatâs not what J.D. is,â said former Audubon County Democratic chairwoman Peggy Smalley. âI think this really promotes him above those other people who have run against King.â

Smalley, 75, a retired 20-year Audubon County treasurer, said Scholten has a rare connectivity with voters. She sees him beating King in November 2020.

âHe seems like heâs a hometown guy,â Smalley said of Scholten. âHe talks common. I get the feeling that heâs one of us.â

Thatâs the way Smith sees it playing out, too.

âHeâs getting out to small towns, heâs for the smallbusiness owners and farmers whereas Steve King, heâs been in office for so long. Heâs just along for the ride in his own self-interest, or against interests we hold dear,â Smith said. âJ.D. is just a person that bonds with us. Itâs
like, OK, weâre worried about the small people. Weâre not worried about political aspirations.â

In addition to calling for the massive cut to congressional salaries, Scholten said he supports lowering the age of Medicare eligibility to 55 â maybe even 50.

âThere are so many horror stories when it comes to health care; itâs tough to hear,â Scholten said.

Scholten said too often in rural Iowa, the health-care plan of last resort is a donation jar or can on the counters of restaurants and convenience stores for people seeking to pay for their own, or a childâs cancer care, or other health issues, with contributions.

One of Scholtenâs takeaways: âItâs harder and harder to live in rural America.â ♦