And 7 other political takeaways 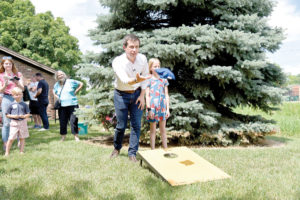 1. Retired Adm. Michael Franken of Sioux City, a native of the Sioux Center area of Iowa and a Democratic candidate for U.S. Senate, said he opted to bring his long military career to a close with the election of President Trump.

âHaving worked for every president since Jimmy Carter, I didnât care to work for this one,â Franken said at a recent Guthrie County Democratic Party dinner in Panora.

You would think that would be the big line of the speech right?

His three pillars if elected: address what he termed a climate crisis, making health care a right for all, and shutting down special interests on Wall Street.

Of special interests, he said, âIt is what pays for Joni Interest â I mean Ernst.â He joked after misspeaking that he may have accidentally found an effective nickname with which to tag U.S. Sen. Joni Ernst, R-Iowa.

The line drew sustained applause. Later, in a text to me, Franken said, âMy oops moment, Ernst vs. Interest. I didnât mean that slip.â

You have to take the admiral at his word. I wouldnât expect to see any âJoni Interestâ commercials from Franken. As for the many outside interest groups on the liberal side, well, perhaps Franken should quickly copyright that line.

2. One question about South Bend Mayor Buttigieg. Can he appeal to minority voters in his White House bid?

I spend a great deal of time in the Latino community in Iowa (recent case in point: I was the only white dude at a Latino birthday party in Denison just this past Saturday). Perhaps the best way to show respect and interest in other cultures, in diversity, is to make an effort to speak in othersâ native languages. Few modern American politicians are fluent or serviceable in as many languages as Buttigieg â eight (including Spanish). Iâve been with Spanish journalists as heâs done interviews in that language.

Shouldnât the effort Buttigieg puts into understanding people on their own turf mean something when it comes to the diversity question?

âIâd like to think so,â Buttigieg told me in an interview. âIf nothing else, itâs a sign of curiosity, and I think curiosity is a quality we need a little more of right now in political leadership because you have to be interested into plunging into some pretty deep questions at a time like this.â

He added, âI think that we need to be embracing rather than threatened by some of these opportunities to have new arrivals and new voices as part of the American fabric. In fact. thatâs always been the case.â

3. With sports gaming legal in Iowa, oddsmakers like William Hill (Prairie Meadowsâ provider) and DraftKings (Wild Roseâs) are spinning out wagering lines on college and professional sports. Itâs not legal to bet on politics, though. Thatâs not the case in the United Kingdom, which has a variety of odds boards, including one on the Iowa Caucuses.

Ladbrokes has Sen. Elizabeth Warren as the favorite. No surprise here. Sheâs even odds to win the caucuses.

Buttigieg is at 5 to 2. Former Vice President Joe Biden is 4 to 1 and Vermont Sen. Bernie Sanders is 5 to 1. Then the odds start getting long. Minnesota Sen. Amy Klobuchar, who has a Midwestern appeal and I think could be closer in the race as someone with whom Iowans intuitively identify, is at 20 to 1 â meaning if you bet $100 today on her to win the caucuses and she does, the payoff would be $2,000. In horseracing parlance, thatâs the very definition of a âgood price.â

4. Sometimes politics is not the time for politics. The recent Guthrie County Democratic Party dinner event, coming just days after two deputies were hit by gunfire when executing a warrant in Stuart, involved a standing ovation for Guthrie County Sheriff Marty Arganbright, a Democrat. Partisan concerns were set aside for a welcome for the sheriff, who reported that Deputies Steven Henry and Jim Mink were on the mend.

In the end, itâs the job, not the party, that matters with his service, Arganbright said.

âWhen we go to a call, Iâve never had somebody ask me what party I belong to,â he said.

That should be a lesson for Democrats in rural areas. In local races, where parties are built, it is possible to elect Democrats in heavily Republican reaches if candidates with competence and integrity are involved.

5. Back to Buttigieg … Heâs come a long way since I talked with him over burgers and beers at the downtown Des Moines Marriott after spotting him walking in for an early February event. Heâs been pulling big crowds, and not just in urban reaches. He drew 450 in Elkader on Sept. 22. Iowa Falls turned out as well.

6. U.S. Rep. Ro Khanna, D-California, heard the message loud and clear over coffee a few weeks ago at the Waveland in Booneville. Bringing tech jobs to rural Iowa from Silicon Valley, which Khanna represents, is energizing for Iowa, but there are game-changing opportunities with the bio-based economy, the use of farm products for a dizzying array of value-added purposes â a case Vilsack passionately and convincingly makes.

âI am working on the Vilsack idea of legislation to expand support for bio manufacturing and have told everyone I can in Congress he is one of the smartest people in our nation on jobs to rural,â Khanna told me.

7. Much thanks to the bipartisan team of U.S. Sens. Chuck Grassley, R-Iowa, and Jon Tester, D-Montana, (both active farmers) who introduced legislation aimed at reducing suicides on the nationâs farms.

The Seeding Rural Resilience Act aims to curb the rising rate of such suicides.

âFarmers are increasingly feeling the pain of sinking commodity prices, devastating natural disasters and ongoing trade disruptions,â Grassley said. âThat, coupled with the largely solitary nature of farming, has led more and more family farmers to desperation and feelings of hopelessness. This should not be the case. This bill continues important efforts to raise awareness about this issue and provide the assistance necessary to encourage farmers and their families during difficult times.â ♦