Why Ro Khanna should be Democratsâ vice presidential candidate

Heâs a little Lyndon Johnson, a little Barack Obama, and thatâs just the right blend for the time. 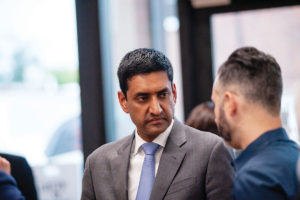 Ro Khanna, a son of immigrants who earned a congressional seat in the nationâs most robust economic district, Californiaâs 17th, home to Silicon Valley, is one of the more popular national figures in, of all places, Jefferson.

The story of how Khanna earned enduring trust and respect there is at the least instructive to other Democrats, but also should place the 43-year-old California congressman, a former Obama Administration Commerce Department official, in the serious mix for consideration as the Democratic Partyâs nominee for vice president in 2020. If you raise the Khanna-on-the-presidential-ticket possibility in west-central Iowa these days, you get heaping helpings of head-nodding â from Democrats, as well as a lot of Trump voters.

âWhatâs not to like?â said Rick Morain, the 78-year-old former publisher of the Jefferson Bee & Herald. âHe came here to talk to us as the perfect place for expansion of tech jobs in rural America. He praised our leaders and worked with our schools. Whatâs more, heâs very likeable and extremely intelligent â and heâs the poster child for personal accomplishment. For me, heâs a role model for every kid in Greene County.â

The strong words from esteemed community leader Morain stem from this: Khanna has delivered for this region of Iowa in ways that were only months ago unimaginable to veterans of economic development. Khanna took on a defining role with Accentureâs computer-software branch opening in Jefferson. This will bring high-paying modern careers to a renovated 1880s building on the courthouse square.

Khanna sees this business grand opening in Jefferson in a national context as part of his urgent strategy to help bridge desperately divided rural and urban areas of the nation through mutually beneficial commerce.

Khannaâs reception here would seem to make the strategy obvious. But it wasnât. He faced naysayers who told the congressman he canât go to rural Iowa and talk about technology â that we wonât comprehend it, or that learning whatâs absent in our lives through the tech companies scooping money and jobs and our lifeblood, in some cases, from the industrial Midwest and segregating it to the coasts will just make us into bitter bunkered Trumpers.

The most important issue in the election is the economy. And today, it is surging in places, roiling in others, because of disruption from technology. The Democrats need a ticket with credibility in the tech sector, the presence of someone who can persuade Silicon Valley and other reaches of innovation, from Austin to Boston, that a nation divided economically by Facebook and Amazon (and robotics) cannot stand, that new wealth must make its way to rural America. In Khanna, the Democrats have such a person.

Khanna is a national campaign co-chairman for the presidential candidacy of U.S. Sen. Bernie Sanders of Vermont. That said, Khannaâs messages about rural development have drawn the attention of many of the Democratic Partyâs White House aspirants.

âI think heâs absolutely right,â former Vice President Joe Biden said in an interview in Sioux City. âLook, one of the things that weâve found, when you take a look, of all the venture capital thatâs gone into investments in the United States, somewhere between 75 and 80 percent have gone to five cities â five, five. It makes no sense.â

Khanna, of course, brings more to the table than Silicon Valley savvy and strong rural instincts. Heâs a leader in the House Progressive Caucus with foreign policy chops. Khanna, who serves on the Armed Services Committee, co-authored the successful bipartisan legislation this summer in which the House demanded that President Trump gain congressional spending authority before using force against Iran.

I spy similarities between Khanna and another American politician who grew up as a âskinny kid with a funny nameâ â President Barack Obama, one of Khannaâs heroes. Khanna is an inspiring speaker, although few politicians in history can hit the soaring notes of Obama.

What Khanna seems to enjoy more than Obama is the legislative process, the networking and old-school cultivating of allies, cajoling of opponents. Heâs a little Lyndon Johnson, a little Obama, in a sense, and thatâs just the right blend for the time.

What Obama and Khanna share is rare: They make issues of race not into finger-pointing opportunities, the politics of âgotcha.â They are aspirational. The moment I knew I was right about Khannaâs national potential came near the end of a forum in Mason City, where Khanna, an Indian American, talked about his response to some recent questions from journalists on race. Had anyone ever told Khanna to go back where he came from (which would be outside of Philadelphia, actually, as the congressman was born there in 1976)?

Well, he acknowledged, during some Little League baseball games, kids had made fun of his full name, Rohit.

âWhen I used to get up to bat, they used to chant, âRo canât hit,â â Khanna said, laughing at that memory, noting that his baseball days were far from distinguished as he sat on a panel with Iowa Democratic congressional candidate J.D. Scholten, a former minor league pitcher.