Condolences for Beau first, then questions for Biden 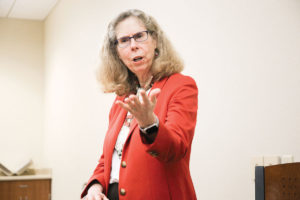 Interviewing surrogates, family members, friends or political associates of the actual candidates for office is most often an eye-rolling obligation more than an opportunity for journalists.

But there are some notable exceptions.

Former Sen. Max Cleland of Georgia was far more entertaining than the candidate he supported in the 2004 presidential election, John Kerry. And in 1994, as a young reporter, I talked in an Ames driveway before a political event with David Eisenhower, the grandson of President Dwight D. Eisenhower, and a roommate at Phillips Exeter Academy of Iowa Congressman Fred Grandy, who was running for governor in the GOP primary that year.

Cleland and Eisenhower were impressive.

But the best candidate surrogate Iâve interviewed, hands down, was Vice President Joe Bidenâs oldest son, Beau Biden, the former attorney general of Delaware who would have been elected governor of that state had he not died of cancer at age 46.

I interviewed Beau Biden several times, as did my colleagues at the Iowa Independent in the 2008 presidential election cycle. We all respected him. Beau Bidenâs accessibility, wit and intelligence made him a wonderfully effective source â so much so that during an editorial meeting we decided that, to be fair, Beau Biden was getting too much press for his dad, from us. We had to forgo some interviews for a few months to even out the Iowa caucuses coverage for the other Democrats in the race.

For his part, Beau Biden, a major in the Delaware Army National Guard who served with the 261st Theater Tactical Signal Brigade, was deployed to Iraq in October 2008 and returned home in September 2009.

As a result, he made an even more forceful advocate for his dad, and President Barack Obama, when I interviewed Beau in 2012.

Beau Biden and I were both born in 1969. He would have joined me in turning 50 this year, so that generational connection made the news of his 2015 death sting even more. Beau Biden is the first major politician who I felt comfortable calling by his first name.

After leading off a series of questions to him in the 2012 race with âMr. Attorney General,â Beau laughed in quick agreement that it made sense for me to use his first name, considering we were just months apart in age.

I reread my stories on Beau Biden this week and came to the same conclusion I did a decade ago: He would have made an estimable candidate for president and a strong voice for my generation.

On a recent Tuesday night in Sioux City, after a long day of campaigning, former Vice President Joe Biden sat down with Political Mercury for a 20-minute interview. We touched on a number of topics, and thatâs reflected in our full coverage of his western Iowa swing this week.

But before I delved into my notebook of questions for Joe Biden, I expressed condolences for the loss of his son, telling him that I expected to be talking with a Biden in the 2020 election Iowa presidential caucuses, this time with the younger Biden as a candidate for the White House himself.

âLook, Barack said it best at his funeral,â Joe Biden said in the interview. âHe said, âHe was Joe 2.0.â And his commander in Iraq, General (Raymond) Odierno, which was not Odiernoâs style, asked to speak at his funeral and he said, âI fully expected Beau to be my commander in chief.ââ

âIt matters a lot, you thinking of my son,â Biden said. âThat means a lot to me.â

Regardless of where you are politically, whether you agree with Biden or plan to vote for him, you have to admire the resiliency of a man who persists in the pursuit of public interest after losing his daughter and first wife in a 1972 car-truck accident, and later his son Beau to cancer.

Beauâs death is first and foremost tragic for the Biden family. But itâs also a loss for the nation. Beau Biden would have enriched the 2020 Democratic field, because he was exactly as President Obama described him.

Vilsack, a former two-term governor of Iowa, has relentlessly advocated biobased manufacturing, the use of all conceivable farm products and byproducts â from corn stalk to manure â for chemicals and clothes and other revenue-generating innovations for farmers.

The Biden plan, released Tuesday during the Democratic presidential frontrunnerâs speech in Manning, spotlights biomanufacturing. It also takes directly from Vilsackâs USDA âstrikeforce,â which helped rural communities cut through the full federal bureaucracy to access a raft of federal programs.

âI relied a lot on Tom (Vilsack), and Tom was a major input in the program,â Biden said in an interview in Sioux City.

A day earlier, Biden appeared with Vilsack, and his wife, Christie, at their home outside of Des Moines in Booneville. Vilsack isnât endorsing a candidate in the Democratic nominating process at this point.

But the Vilsacks have a long-standing relationship with Biden, who said Vilsack played a leading role in shaping his rural plan.

âI talked to Tom about this a long time ago when we worked together because I was the guy who was going into most of the rural areas for the administration with Tom,â Biden said.

In a phone interview, Tom Vilsack said Bidenâs plan will appeal to rural Iowans because it is both aspirational and practical. He sees boosting plant-based manufacturing as potentially creating billions of dollars in new wealth for Iowans.

âI impressed upon the vice president the need for more of that,â Vilsack said. ♦