Let me go to the bathroom on my own 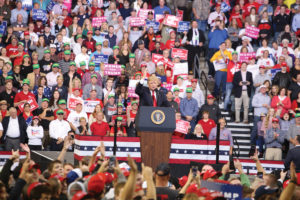 President Donald Trump fires up the crowd at a political rally at the the Mid-America Center in Council Bluffs on Oct. 9.

On this night in Council Bluffs, there would be the stage antics, the stand-up routine from the president, the hand-waving, the impersonations from behind the official seal.

Iâd surely report some zingers from our commander in chief â his now exhausted labeling of Sen. Elizabeth Warren as âPocahontasâ and his newly minted rhyme on Democrat Cindy Axne. (âTax-Me,â Trump said. âThat was so easy,â he added.)

But as a rural Iowa newspaper owner, my mission for the coverage of President Donald Trumpâs rally in Council Bluffs centered on the agricultural angle â a big one â involving Iowa commodity-boosting ethanol.

But to report this material â at once essential for our economy and unequivocally positive for our president â I had to endure some disquieting treatment.

First, the Trump team escorts members of the media to a pen near the back of the event center. If you have to leave for the bathroom, the Trump staff/volunteers walk you there and make sure you donât talk to anyone at the event. A Los Angeles Times reporter, Eli Stokols, and I were chaperoned from the journalistâs fenced-off zone to the bathroom and back.

Several people from Iowa saw me along the way and wanted to chat, but I was directed toward the restroom and then shuttled right back to the media area. No talking to voters, citizens. A Trump volunteer actually stopped me from talking to people who initiated conversations with me â people who have known me for 20-plus years.

âHave covered a lot of Trump rallies, but never seen press pen as locked down as it is here in Council Bluffs,â Stokols said on Twitter from the Trump Council Bluffs event. âHave now been escorted to the bathrooms and yelled at by advance team for attempting to talk with Trump supporters in the crowd.â

Fortunately, several staffers for Iowa-elected officials and renewable energy leaders came over to the front of the media pen on their own to talk with me.

And I followed through with the intent of the night where our newspaper is concerned â hit the ethanol angle hard and early, explain the policy implications, the business facts.

To report that, I had to first listen to the jeering of the media, driven in large part by Iowa Republican Party Chairman Jeff Kaufmann, who used much of his speech (on a night meant for ethanol) to trash us. He whipped the crowd up, directing a palpably hostile energy in the direction of working journalists â a group which includes a lot of cameramen and women and technical people who never write or say a word, but, rather, have been on hand to blast Trumpâs every word into the homes of millions.

â¢ âI am so sick of journalists who are supposed to present information for all of us to decide. I am tired of so-called journalists constantly being political commentators,â Kaufmann said.

Political rallies â both Democratic and Republican â attract some mentally unstable people, idolaters really, considering their hero worshipping of Trump or Obama, who donât understand the theatrical aspects, the rhetorical tricks, of the game of politics. They take words literally, as marching orders, permission to be crazy.

At the same time, Trump assailed Democrats as âdangerousâ and âwackosâ and âunhingedâ as the audience chanted âlock her upâ with references to former Democratic presidential candidate Hillary Clinton and U.S. Sen. Dianne Feinstein, D-California.

Itâs a toxic atmosphere, and one many Republicans tell me makes them uncomfortable.

Two weeks ago, in a remote Kansas cemetery, we buried my late father, a Korean War-era veteran. In my eulogy, I also paid respects to even earlier generations of my family, recalling with fondness how my great-grandmother took so much pride being a member of the Daughters of Union Veterans. Her final resting place is near Dadâs. The echoes of the Civil War and my familyâs involvement in it were very much in the air for me that rainy Saturday in Emporia, Kansas.

A little more than 72 hours later, Iâm at the Trump rally, trying to reconcile his America with the one my departed loved ones served to preserve.

Grandma and Dad, who hailed from the Emporia of journalist William Allen White, would want me to keep writing, working to put out newspapers, even if my president describes me as an enemy of the people.

To be honest, Iâm OK with the criticism, but for the love of God, let me go to the bathroom on my own. ♦