Defend the billionaire, attack the millionaire 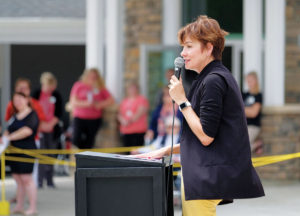 Back in 1976, we gathered as kids around the console TV for what amounted to national viewings of primetime movies, big events, like John Travoltaâs âBoy In The Bubble.â

It seemed an awful, isolated life for this plastic-protected kid, born with a deficient immune system, hermetically sealed from all meaningful human contact.

We watched the made-for-TV movie and went to school as second-graders feeling sorry for Travoltaâs character.
He didnât choose that life. Itâs not fair. Who could live like that?

As it turns out, millions of Americans in filter bubbles see, hear and feel only ânewsâ and âinformationâ with which they agree. The bubble is structured with ideological reinforcement, tribal tropes and confirmation bias.

And this is why Iowa Republicansâ strategy of using economic-class-based attacks against the Democratic nominee for governor, well-heeled Des Moines businessman Fred Hubbell, may just work in spite of the head-spinning hypocrisy.

Republicans are defending their billionaire president while sounding more populist than Tom Harkin in seeking to diminish the Iowa-ness of Hubbell. Itâs one of the more remarkable political juggling acts Iâve seen in a quarter century, right on par with self-described feminists voting for Bill Clinton â twice.

Perhaps the issue for Republicans is not the Trump and Hubbell money, but how it is spent. Trump lavishes cash on things regular guys imagine theyâd lose riches on, were they, too, swimming in dollars. Hubbell uses his money to buy books, travels with his family and donates to the arts and places like Simpson College.

Ernst and her close friend and fellow Republican, Gov. Kim Reynolds, slammed Hubbell as an effete, out-of-touch denizen of the better part of town â a man who lives in a world of âfamous namesâ and âbig checksâ who they say canât possibly understand the challenges and culture of everyday Iowans like them.

Jeff Kaufmann, chairman of the Iowa Republican Party, tagged Hubbell, a member of one of Des Moinesâ founding families, as âSir Frederick Hubbell.â

âSir Frederick Hubbell, the Privileged Prince of Polk County, can travel all he wants across the state â but the truth is heâs never shown an interest in small-town, rural Iowa,â Kaufmann wrote on Twitter June 22. âHis superficial photo ops will not change that fact in this election.â

Ernst, at the roast outside of Boone earlier this month, sought to draw strong class and cultural distinctions between Hubbell and Reynolds, a former Clarke County treasurer who grew up in St. Charles and worked as a waitress at Younkers and a checker at Hy-Vee, and graduated from Iowa State University late in life.

âThe reason you make a difference, Kim, is because you are one of us,â Ernst said.

Ernst, for her part, grew up on a Montgomery County farm and is the first female combat veteran to serve in the U.S. Senate.

âKim is Iowa through and through,â Ernst said surrounded by hay bales and American flags. âShe has grown up just like you and I grew up.â

To hear the Iowa girls tell it, Reynolds is so Iowa youâd think she was baptized five times â in the Mississippi, Missouri, Raccoon, Cedar and Des Moines rivers. The preacher may even have dipped her head in Lake Rathbun.
At the roast and ride, Reynolds delivered the best speech Iâve seen her give since she arrived on the statewide scene in 2010. Sheâs in her natural habitat as a surpassingly effective class warrior because she very much believes sheâs more Iowan, more everyday people, than Hubbell. Itâs not a manufactured line of attack from Reynolds. I talked with her about this, and she genuinely, deep in her St. Charles bones, thinks sheâs the real Iowan, and that Hubbell arrived via a Des Moines street named after his family from a terraformed Mars.

But not all Republicans are comfortable with the clear hypocrisy of using class-based tactics in the race, of celebrating their billionaire commander in chief while shredding the Democratsâ millionaire Terrace Hill aspirant. For generations, Republicans have cried foul over the framing of wealthy candidates, from the Bushes to Mitt Romney. Now, when it suits them, they want in on the cash bash?

U.S. Sen. Charles Grassley, R-Iowa, a strong supporter of Reynolds, said the GOP strategy of attacking Hubbell as too rich for the job is misguided and could backfire in November.

âBy insinuating something thatâs kind of ad hominem, I donât think thatâs smart,â Grassley said in an interview with this newspaper in his Washington, D.C., office. âItâs pretty obvious, at least to people in Des Moines, that heâs a very wealthy person. It may not be in New Hartford, Iowa, but it wouldnât hurt for the people in New Hartford, Iowa, to hear that. But I think the âsirâ thing is a problem.â

Grassley, who was first elected by Iowa voters (to the Legislature) during the Eisenhower Administration, says heâd advise a different approach for Reynolds.

âI think that the voters want you to stick to policy,â Grassley said. âAnd I think thereâs plenty with what he (Hubbell) wants to accomplish that is bad policy, and if you just talk about the policy, youâll win the election.â

So how does Hubbell respond?

âIâm only doing what Iâm doing because for me itâs another way to give back to Iowa,â he said in response to those questions at an event in Carroll just days after securing his partyâs nomination.

Hubbell said he plans to be the top donor to his own campaign to show heâs not going to be a captive of special interests.

âI donât want other people being able to tell me what to do,â Hubbell said.

âThose people you are talking to probably voted for some other guy sitting in D.C. right now,â Hubbell said. ♦