Steve King makes his case for re-election to Congress 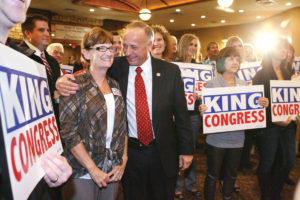 Congressman Steve King, R-Iowa, is pictured with supporters following a decisive re-election win in 2012. King is seeking re-election this November in a district in which he has dominated at the polls. (Photo courtesy of Carroll Daily Times Herald)

In answering a wide-open question about what heâd most like to see associated with his re-election campaign, U.S. Rep. Steve King, R-Kiron, didnât hesitate in spotlighting the anti-abortion beliefs that motivated the now eight-term congressman to enter politics more than two decades ago.

âI think people know what I stand for,â King said in an interview with this newspaper. âOne is the heartbeat bill.â

King, who has authored that legislation â The Federal Heartbeat Protection Act (HR490) â in the U.S. House, said physicians should be mandated to check for a heartbeat in a baby before performing an abortion.

âIf a heartbeat can be detected, the baby is protected,â King said. âWe know thatâs life. The Knights of Columbus have put up billboards all over this country by the thousands to say, âAbortion stops a beating heart.â â

King said he is positioning the heartbeat legislation to take advantage of what he expects to be a more conservative U.S. Supreme Court.

âWe donât have time to wait,â he said. âIf we wait until the court is favorable, we have to take onto our conscience a million perfect little babies every year until we can get this court to turn around again.â

King said the abortion stance is reflective of a cultural connectivity he shares with western and central Iowans.
âThe positions Iâve taken are utterly consistent with a significant majority of the people all across the 4th District,â King said.

King said Iowans in the 39-county sweep he represents in Washington, D.C., should âcount their blessings.â
âI mean that from an economic standpoint especially,â he said.

He said Iowa is the No. 1 state in which to live, a reference to a February U.S. News & World Report piece giving Iowa top-tier reviews on education, infrastructure and other qualities.

Specifically, he said he has helped deliver on a promise to four-lane U.S. Highway 20 across the state.

âWe will cut the ribbon on that before the election in November, because politics trumps bad weather,â King said.
Whatâs more, he said, Iowa is the No. 1 renewable-energy-producing district in the nation with biofuels, wind energy and solar.

âWe have development, and we have growth,â he said. âThereâs a lot that is happening that is good.â

King said he understands his district as well as anyone, as heâs met with people in each of its 382 cities and remains in touch. Either King himself or his staff visit all of the cities annually, he said.

King, a construction company owner who said he vividly recalls living in rural Iowa during the farm crisis of the 1980s, said heâs highly concerned about the effects on ag markets of President Trumpâs $50 billion in tariffs on Chinese imports. The Chinese quickly struck back on the U.S. agricultural economy.

âIf Tom Clancy were alive today writing a novel about a trade war, how it begins and how it plays out, we would be in about chapter two right now in reality,â King said. âAnd the trade war now has begun, and it could be dialed back. I hope it is. Having said that, I never would have put the tariffs on steel and aluminum that were put on. We have to play it out now, because that decision is made.â

The congressman, who serves on the House Agriculture Committee, said retaliatory tariffs from China were predictable.

King said he has talked directly with President Trump; Larry Kudlow, director of the National Economic Council; and Peter Navarro, the chief of the presidentâs National Trade Council, on the tariffs and American agriculture.

âThese guys are people I am dealing with one on one,â he said.

King said the United States should pursue a host of bilateral trade agreements, adding he is encouraged that Trump may be reconsidering the Trans-Pacific Partnership. The TPP, which Trump scuttled after winning the White House, is a trade pact involving 12 nations, including the United States, that border the Pacific Ocean and represent 40 percent of the worldâs economic output.

âIâm a strong supporter of the Trans-Pacific Partnership,â King said.