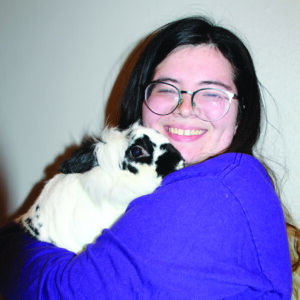 Heaven Perez is passionate about saving animals and insists she could easily foster or adopt 200. But, for now, sheâs content with two rabbits and two dogs at home.

Perez first adopted Pongo, her rabbit, from the Animal Rescue League (ARL) five years ago. She was working at the ARL and fell in love with the deaf rabbit.

âI had dogs and cats my whole life but fell in love with her personality. I actually like rabbits more than dogs,â she admits.

Because of her love of rabbits, Perez began fostering rabbits with A Home For EveryBunny, a foster rabbit non-profit. One rabbit, Beyonce, kept getting returned because of behavior issues. Perez resisted adopting a second rabbit, but again, she fell in love.

âShe was scared. Rabbits are prey animals, and theyâll have stressors, such as dogs or kids, and will act out. They need the proper environment,â she explains. 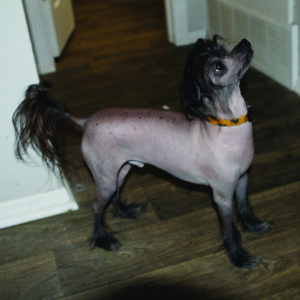 When she introduced Pongo and Beyonce, she hoped the two would bond. Each has their own enclosure next to one another.

âPongo is too assertive and wants to groom Beyonce. They quarrel a bit. It takes a while. Itâs like sending a toddler to school. They are fine being neighbors,â she says.

Her favorite part about the rabbits is when they execute a âbinky,â which is a playful twisting leap, indicating happiness.

âPongo has a lazy binky. She twists her head but doesnât jump too high,â she says.

Added to the pet mix is two dogs: Donte, a Mexican hairless, and Finn, a Chinese crested. âFinn loves rabbits, and he and Pongo chase each other,â Perez says. âThey like to play and hang out.â

She rescued Donte from a shelter in Illinois. The busy family gave him up because he had too much energy.

âThey kept him in a crate all day. Iâm trying to give him what was stolen from him. He never had a puppyhood because he was in a crate,â she says. 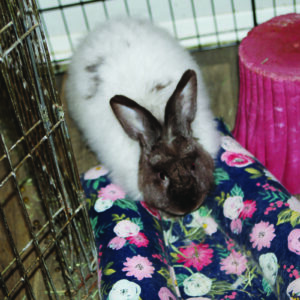 Beyonce acts out when she is stressed so had been returned to foster care more than once before Heaven Perez decided to give her a home.

Perez is passionate about finding homes and advocating for pets. Sheâs in the pet business as a pet groomer, and her goal is to better the animal industry. She says that shelters give animals good temporary homes. Sheâs often witnessed pets whose owners didnât or couldnât give them a good home.

âItâs important to do right by these animals. We all have the power to do something good. They donât have a voice, but we do,â she says.

She encourages humans to get involved in helping animals.

âEven if you canât foster or adopt, just sitting with them at the shelter is everything. They need the love and attention â something they are missing out on,â she suggests.

She is happiest when she gets off work.

âI get to come home to these guys and girls. They are my favorite four. Theyâre so excited to wake up the next day. They donât care if you had a bad day or your boss yelled at you. They give back,â she says. ♦