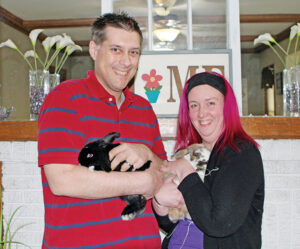 Both Dustin and Claire Olsem are involved with EveryBunny rescue. The Olsems are pictured with their pet rabbits Sapphire and Patch.

When Claire Olsemâs 14-year-old son wanted a rabbit, he outlined a responsibility chart as to how he would take care of the bunny. Once he brought home Dynamo, Claire and her husband, Dustin, both became instant bunny lovers, first fostering rabbits, then adopting their own. They now have two rabbits, Patch and Sapphire.

Patch was a foster rabbit and was given up to A Home For EveryBunny, Iowaâs only foster-based rabbit rescue. The Olsems brought Patch to their home â temporarily. When he arrived, he had health problems they thought might require surgery. After a fundraising campaign for Patch, he became a âposter rabbitâ for the organization. It turns out Patch didnât need surgery. The funds went back to help with other bunnies.

As Patch was a social bunny, they thought a companion would be ideal. An adorable black bunny with blue eyes, Sapphire, came to the EveryBunny rescue. Would Patch and Sapphire get along once they got home? Each rabbit had its own enclosure equipped with hay, toys and litter boxes.

When rabbits are afraid, they thump the floor with their hind legs. Patch was thumping, and this meant he wasnât getting enough attention. Before long, the two became buddies.

Dustin says, âPatch has adopted some of Sapphireâs mannerisms. They both have a fear of missing out and have to stay in the action and hop over to the couch where weâre sitting.â

Both Dustin and Claire are involved with the EveryBunny rescue, where they receive unwanted rabbits and help find homes for them. Foster families, such as the Olsems, foster rabbits until adopted. Rabbits are often given up the month of May.

âIt takes about one to four weeks after Easter for prime dumping season. People think rabbits are cute, and kids get tired of them. Theyâre more work than a hamster,â explains Claire.

Claire says domestic rabbits arenât the same as wild rabbits and canât survive in the wild. Rabbits are taken to animal shelters but donât do well with some animals. Thatâs why Rachel McCarl founded the organization five years ago.

âOne woman became passionate about keeping bunnies separate, as they were right next to the puppy room in a shelter,â Claire says. âThey were terrified. Theyâve rehomed over 200 rabbits just last year.â

Earlier this spring, the couple drove three hours for a dramatic rescue to help locate dozens of rabbits.

âWe think a breeder who didnât sell their Easter rabbits put them into the wild,â says Dustin. âWe managed to rescue 11 bunnies.â

When rabbits are happy, theyâre known to do a âbinky,â where they jump up and twist around.

âSapphire gets a good binky,â Dustin says. âIf it wasnât for the work with the rescue, he probably wouldnât be so happy.â

The couple also has a dog, but they say rabbits are smart and unique.

But it is all worth it for the Olsems, even with their self-described label.