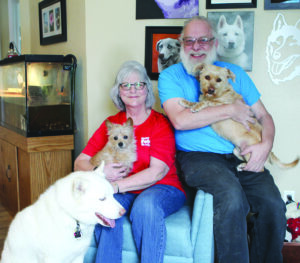 Through the years, Eric and Lorrie Culp of Des Moines have cared for more than a dozen dogs, mostly rescue dogs.

They love practically all dog breeds, and Eric even plays Santa Claus while having pictures taken with pets for their owners to enjoy at Christmas time. Ericâs real beard is a draw, and folks return yearly for fundraisers for the Pet Project at the Pet Expo to pose their four-legged friend on Santaâs lap.

âItâs fun to see the kids grow up and come back each year to the Pet Expo,â Eric adds.

The Culps currently have three dogs, Daisy, Toto and Whidbey. Each of the animals were rescue dogs, as the pair is passionate about giving dogs a second chance.

Whidbey is a Siberian husky and is their seventh husky dog. Whidbey is named after the Whidbey Island Naval Station, where Eric served in the military. Born in a breederâs barn, Whidbey wasnât socialized and remains timid. They couldnât touch the top of his head without him flinching. His personality quickly changed once they got him home. They found him at the Taysia Blue Siberian Husky and Malamute Rescue. In its 10th year, Taysia has rescued 1,500 dogs.

Whidbey alternates between very independent to a couch potato. When the Culps had three huskies at once, the dogs were continually pulling on the leash.

âOne husky was sure she was on the Iditarod,â says Lorrie.

Another husky was rescued from a breeder.

âHis jaw was too short, and the breeder was going to put him down,â says Eric. âHe lasted nine years with us.â

One of their previous dogs, Vincent, was tied up with a tow chain to a boxcar for four years. His fur was bright orange, as he was sunburnt from being outside. After they adopted Vincent (name after Vincent Van Gogh), his fur fell out and grew back in brown.

Eric says dogs end up in rescues, as people arenât sure how to raise them correctly.

âPeople go on about a pit bull being dangerous. Itâs not the animal; itâs the person,â he explains. âOften a dog is hyper if theyâve been in a cage all day. So many good dogs end up being put down needlessly. It breaks my heart.â

Whidbey is a helpful sibling to Daisy. When she was first adopted, he walked Daisy to go outside and nudged her to the water bowl.

When Lorrie and Eric first met, she only liked small dogs and was afraid of Ericâs bigger ones.

âLorrie asked if my husky puppy would get any bigger,â remembers Eric. âI said no. I knew she would grow to love him.â

Because of their dedication to animals, the pair opened up Fetch Pet Care services. With bonded and licensed pet sitters, they accept dog walking assignments and tend to pet ownersâ needs.

Lorrie loves all types of animals â theyâve had parakeets, guinea pigs and turtles â but dogs are her favorite.