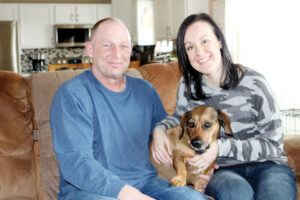 Kristen and Cory Schattschneider with their latest adoption, Millie. Photo by Jackie Wilson

Kristen and Cory Schattschneider attempted to be dogless after their first dog passed away from cancer. But before long, they both craved a canine companion.

After searching through animal rescue sites, Kristen came upon a beagle/basset hound mix on AHeinz57. After visiting the unique dog, they decided it needed a home. So, in August of 2019, they adopted Millie.

As a rescue dog requirement, Millie was scheduled with the veterinarian to get spayed, but the doctor refused to do the procedure. Why? It turned out that Millie was pregnant.

The vet asked if they still wanted the dog, and both wholeheartedly agreed they did â but they werenât sure about raising puppies. They took Millie to a foster dog mom, who agreed to keep Millie until she gave birth. They visited Millie and then eventually her nine puppies. Once the puppies were weaned, it was time for Millie to come home.

Millie originally arrived via the AHeinz57 pet transport from a dog-hoarding situation in Oklahoma. AHeinz57 brings various dogs to Iowa, saving them from being euthanized. Millie was found living under a pickup truck and had recently given birth.

When Millie was first brought into a foster home, she didnât like men. Kristen says, âIt breaks my heart to think of what happened to her. She wasnât a big fan of Cory.â

Yet, as she got used to trusting Cory, and as they wrestled and tugged with Millieâs favorite stuffed toys, she began to trust him.

Millie is no longer afraid of people or new situations.

âItâs so rewarding to see her become brave,â says Kristen. âShe used to cower at the vet. Now she just struts in.â

The couple admits to spoiling Millie. As they visit a fast-food drive through, Millie is treated to a pup cup of ice cream, usually on a Saturday evening.

âOur routine is to get her white blanket to take on the drive,â says Cory. âOnce she sees the blanket, she somehow knows it is time to eat her pup cup and gets excited.â

To find out Millieâs breed, Cory administered a DNA test. It turns out she has seven different breeds, including Boston terrier, Doberman pincher, Rottweiler, dachshund and more.

Kristen is confident sheâll continue to adopt rescue dogs, but she understands that people buy purebreds so owners know the lineage.

âThere are many dogs out there who need love,â she says. âItâs a good cause to adopt. Something happened in their first part of life. We hope their second part of life is better.â

âItâs our experience that dogs know theyâre given a second chance and love us even more,â says Cory. âEven when sheâs on top of us at 8 a.m., barking and waking us up, we love her.â ♦