The Bedwells and their fainting goats 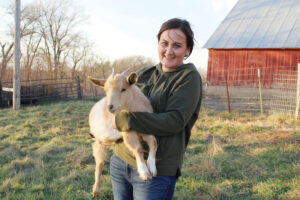 Tahra Bedwell holds River, one of the fainting goats her family has as a pet.

Pet owners enjoy a good laugh with their pets. Cats are notorious for arching their backs, turning sideways if their owner sneaks up on them. A dogâs eyebrows wiggle up and down. And what does a goat do when itâs surprised? It faints.

At least thatâs what happens to the Bedwell family goats. Tahra and Don Bedwell obtained a fainting goat as a pet for their 3-year-old daughter, Hanna. The breed was tame, small and easy to take care of.

The family kept adding more goats and began raising and selling under the name âHannaâs Upside Down Goats.â

Technically the goats donât faint, according to Tahra. Fainting is a temporary loss of consciousness, occurring in the nervous system. In the case of a fainting goat, itâs called myotonia congenita. If the goat gets startled, its muscles lock up, and it falls over. Thus, it is commonly called fainting.

âSometimes they tense when they stand up or they fall on their side,â she explains. âSome think itâs horrible, but itâs not harmful. They donât really faint.â

When the family first obtained the goats, the animals would frequently faint.

âWeâd open up a gate, and they faint,â she remembers. âWeâd throw a hay bale down from the hay loft, and theyâd faint.â

The Bedwells have named all their goats. Felix is the one that tends to faint more than others. Tahra says some have a higher degree of myotonia. As Hanna was showing a goat at the fair, one of them fainted while being weighed on the scale.

The Bedwellsâ neighbor thinks itâs funny when he drives by in his pickup truck, honking the horn. Tahra says the goats are getting used to the family and donât faint as much or faint on demand â which was the case when I interviewed the family.

âItâs hard for them to faint. Itâs not just the snap of a finger,â she says.

The goats are great as pets and have done well at petting zoos, parades and with school-aged kids who come to visit. During the pandemic, they saw an uptick of grandparents purchasing goats as an outdoor activity to share with their grandkids.

The family shakes a bucket of feed, and the goats come running. Tahra has learned which flowers to plant that the goats donât like. She says goats donât eat cans, but they do eat weeds and poison ivy and they clean up cow pastures. They come in a variety of colors with different eye colors.

Tahra says raising goats has taught their kids to be caring, more responsible and to have common sense.

âPeople have cats and dogs as pets. Goats are fun creatures. They are easy going, nice animals,â she says. ♦