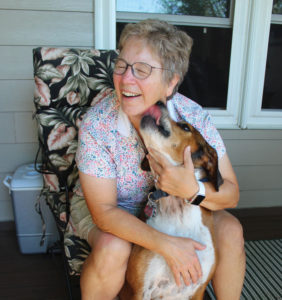 When Linda Brownâs boxer passed away suddenly two years ago, she was left without a furry companion. Her friend who worked at Animal Lifeline, a no-kill shelter, told her of a boxer-mix that had lived at the shelter for two years and needed a home.

Brown went to see Wyatt and admits she wasnât impressed.

âIt wasnât love at first sight,â she says. âHe was distracted by the shelter sounds and seemed uninterested in people.â

Wyatt, a mix of American bulldog, German shorthair and Staffordshire terrier, required a special diet for his allergies and a family that could help with his medical needs.

âHe needed a home,â she remembers. âWe had a vacancy, and we took him.â

Once Wyatt arrived at Brown and her husbandâs home, he quickly felt at ease.

âIt was like he was home and all the behaviors he had at the shelter â he didnât have once he got here,â she says.

Wyatt flourished under Brownâs care. The first month he gained 10 pounds. Since his adoption, heâs gained 30 pounds. At 100, she says heâs a bit âchubby.â His allergies have improved, and Brown admits heâs a bit expensive, as heâs had two knee surgeries.

Wyatt loves walks just as much as Brown does. Once, when the pair went to a local park, she heard two people yelling Wyattâs name. The women came up to Wyatt, who ran to them without hesitation. The pair were employees at Animal Lifeline, where Wyatt had lived.

âHe just loves them. Itâs a testament to the care they provide,â she says. âBut he knew to come running back to me.â

Wyatt is loyal and easy going, and heâs also protective of Brown. She feels safe walking, as Wyatt never lets her out of sight. Sheâs learned to be cautious to any strange dogs acting aggressively.

âI donât want to put him in a position where he has to do something,â she explains.

Wyatt is a âchattyâ dog and knows what he wants. If itâs a treat he desires, he cocks his head, âtalksâ and dashes to the treat jar. He notices when Brown has one bite of food from her dinner plate, as he sits in anticipation.

âHe has a sixth sense of when Iâm about to finish dinner,â she says. âHe always gets the last bite.â

Brown and Wyatt go everywhere together. In the summer, he swims at Copper Creek, and she takes him to her Master Gardener sites.

Stopping at Lowes, he can count on a treat from one of the employeesâ pockets. Brown admits Wyatt might be a bit spoiled. She jokes with her husband that Wyatt is her buddy.

âIâve been married for 41 years. Iâm not sure my list of priorities. Itâs a toss up between you and Wyatt,â she laughs.

If given the chance, sheâd adopt from Animal Lifeline again in a âheartbeat.â

âWyatt was lucky,â she says. âAnd I was lucky we rescued him. Wyatt is a gem.â ♦