When Mary Westâs kids exited the school bus, cats walked to greet them on the long lane. 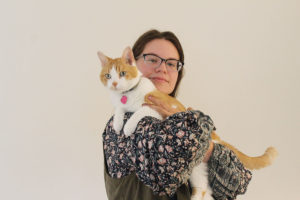 Heidi West holds her cat, Bunny. She and her siblings took care of dozens of stray cats and kittens on their farm. Photo by Jackie Wilson

Mary West never considered herself a cat person. Yet, as the mother of six children, her mothering instincts took over when homeless kittens needed nursing back to health.

Stray cats often found their way to the Westâs family home. Mary and her daughter, Heidi, explained they used to live on a dead-end road in the country in Illinois. People from town dropped off and abandoned pregnant cats and boxes of kittens.

As many as 14 outdoor cats lived outside, while a few tame kittens lived inside. Mary felt sad and took each cat to the veterinarian to be spayed or neutered and vaccinated. Soon, it became too costly, and she only gave shots to the indoor cats.

âOur neighbors were irritated because their cats would come to our house because they got fed better,â says Heidi.

Earlier this year, Mary moved to Des Moines, while Heidiâs job was furloughed due to the pandemic, so she tagged along. Each brought with them a remaining stray cat.

Buddy is Maryâs cat, and Bunny is Heidiâs cat. Buddy and Bunny are brothers and were born three months apart by the same mom cat but from different litters. Their catsâ mom was considered feral, and she was discovered while pregnant.

The mom hid all the kittens except for Bunny and then ran off. Bunny hadnât been weaned.

âHe survived being bottle fed,â says Mary. âIt brought out the mom in me. If my kids are sick, I have to take care of them and love them.â

Mary was determined to find the mom and get her fixed, then she showed up a few months later, again pregnant. This time, Buddy was found underneath a bush, starving and dehydrated. Again, keeping another kitten alive was her priority. Mary finally captured the mom cat with a fishing net and took her to be spayed.

Heidi says that she and her siblings named each cat and wanted to take in every stray, but Mary wouldnât let them. When the kids got off the school bus, all the cats walked to greet them on the long lane. One cat became ill and was not expected to live long, so Mary drove the cat four hours to her daughterâs college to say goodbye.

Today, the two cats get along under the same roof. Heidi and Mary both joke about which cat âloves me more.â Or, if one cat is naughty, theyâll know which cat to blame (not their own).

They both credit their love of cats to the dozens of cats they nurtured over the years.

âI donât want to be a crazy cat lady,â says Mary. âBut theyâre so adorable. I just love them to death.â

âI love their different personalities,â adds Heidi. âUnlike a dog, theyâre easier to take care of, and they donât smell as bad as a dog.â ♦