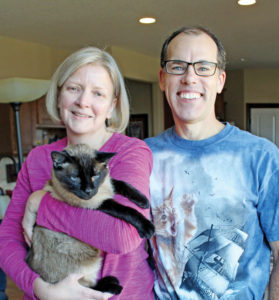 Thatâs the number of cats that have lived with Terry and Stephanie Kruse since 2004.

Not all at once, thankfully, but most stay for a few weeks until forever families adopt them.

The Kruses volunteer with the Animal Rescue League, fostering cats. The pair began fostering as a way to volunteer their time. Both are admitted cat lovers, and the couple has ended up adopting five cats throughout the years.

âOur four current cats are âfoster fails.â Our first cat was a Siamese that was running up our backs, convincing us he needed to stay,â says Stephanie.

They foster mostly kittens, frequently picking up a whole litter from the ARL. Fostering helps relieve the ARL from overcrowding and precious temporary housing space. Part of fostering the kitten population is to socialize and train them before theyâre up for adoption.
The largest group of kittens theyâve fostered is seven, plus the mom. Most of the time theyâll have anywhere from four to a dozen cats at their home. One litter of kittens was all black.

âWhen they get to their crazy stage, then they go back and we get to enjoy our older cats,â she says.

The foster cats and kittens have their own room in the basement. When the Kruses moved to their new home in Clive, one requirement was a room specifically for their foster cats. The room has washable flooring, cat towers, scratching and clawing devices and toys. The adjacent bathroom houses litter boxes and cleaning stations.

Posted on the wall is a poster of all of the cats theyâve fostered over the years. Terry takes photos of the foster cats and started a Facebook page of his photos, âWhiskers on Kittens.â Heâs hoping the adorable pictures attract adoptions.

The pair says itâs a lot of work fostering cats, but itâs rewarding. Stephanie explains, âMy work gets busy, and I canât go someplace to volunteer. This is a way to help animals and contribute, spending time with them at home. Itâs a stress reliever from my job.â

Theyâll invite neighborsâ kids over to play and help socialize the kittens. Some neighbors ended up adopting a few of their foster kittens.

Terry and Stephanie have become attached to the kittens and say its fun to see how the catsâ personalities develop.

âWhen you have to say goodbye, itâs hard,â says Terry. âItâs nice to have them, but itâs nice when they leave. We enjoy sharing our experience of owning cats and having kittens.â ♦