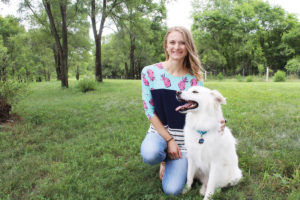 Kate Crane first fostered Nico and then adopted him. Heâs the classic case of âfoster fail.â

As a devoted cat person for most of her life, Kate Crane never dreamed of owning a dog. Growing up, her family had cats, and her cat, Lizzie, was the perfect companion.

However, when Crane became roommates with a girl who fostered dogs, she felt she should be involved as well. Her roommate strongly suggested, âIf you live here, youâll help rescue dogs.â

So, Crane fostered a white fluffy dog, Nico. She didnât intend to keep him, but would simply look after him for a few weeks until a permanent home could be found.

âI thought I could try it out to see if I could have a dog,â Crane says. âIt seemed like a bigger time commitment than cats.â

Yet Nico seemed like the perfect dog, and she ended up adopting him. The dog is the example of a classic âfoster failâ situation, where the person temporarily fostering an animal eventually adopts the pet.

âFoster fail is common, but itâs a good thing for the animal,â says Crane.

Part of her requirement was that Nico and her cat Lizzie get along.

âMy final straw was, if they donât get along, it might not work, and I wouldnât adopt him,â she says. âThe dog could care less about the cat. The two tend to ignore each other.â

Now both the cat and dog are finding a corner on Craneâs bed to sleep at night. Nico keeps her active, and Crane says she enjoys a companion on her long walks.

There are some challenges with raising a rescue dog. Crane is not sure of Nicoâs background, and the dog has several fears, which may be related to abuse.

âHe was afraid of everything. He was afraid of getting in and out of the car and afraid of wood floors.  He was terrified of watermelon. Since we donât know their history, it impacts how they come into a new home,â she says.

Despite growing pains and obstacles to gaining trust, owning a dog has been a wonderful experience for Crane. Nico travels with her, and she takes him to dog parks and dog-friendly outings. Craneâs father, who never really liked dogs, told her that dogs are a lot of work. However, since he met Nico, heâs slowly changing his mind.

âI think heâs got a soft spot for him, and now heâs more open to dogs,â she says.

Crane says the hardest part of a foster dog is overcoming barriers related from being raised in an unloving home.

âThe rewards outweigh any challenges,â she says. âHeâs so cute and excited every time he sees me. It puts a smile on my face.â ♦