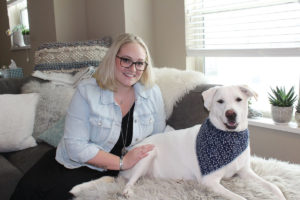 Heather Stolp and her dog, Griffin.

At age 10, Heather Stolp started a pet-sitting business, caring for the neighborâs fish, dogs and cats. Their own family dog was treasured, until the dog passed away.

As an adult, she knew she needed her own dog and began searching adoption sites. She saw the perfect puppy, Griffin, on a rescue website at the Hope Animal Rescue of Iowa. Griffin had arrived from a sick, dirty litter from Oklahoma. As a foster dog, his foster mom worked to get him out of his shell, until he could get adopted.

Grateful for the foster care her dog received, Heather began fostering dogs. She now serves as an adoption coordinator with Hope Animal Rescue.

âThere are so many dogs that are abused, not loved and not taken care of,â she explains. âIf they donât get our help, theyâll be euthanized. Each dog we foster is just one more life we can save.â

As a foster dog mom, sheâs taken in 11 dogs over the past year. She says the dogs are often terrified, especially those who have been abused.

âItâs sometimes difficult to gain a dogâs trust and have them know youâre there for them,â she says. âBut once you get past that, the hardest part is letting the foster go.â

Griffin loves all the dogs that come into their home, even if they are only there for a short time.

Heather admits to spoiling Griffin. Heâll often travel with her on business or leisure trips, hanging out in the hotel together. Theyâll attend the farmers market and dog parks. She knows all the dog-friendly places in Des Moines.

âMy generation has changed how dog ownership is. I go shopping more for things for him than I do for me. Heâs like another family member with fur and four legs,â she says.

Because of Griffinâs fun personality and being a ârescue original,â he has his own Instagram account. With more than 200 followers, she posts Griffinâs antics of drinking water from the bathtub faucet, with his tail peaking from the shower curtain.

The next step is training Griffin to be a therapy dog, where she is ready to volunteer at hospitals and schools. So far, he knows his jumping limits and does well with folks in wheelchairs.

Heather says training a rescue dog is difficult, but itâs worth it. She admits she could be a full-time, stay-at-home dog mom if it was an option.

âItâs not âjust a dog;â heâs my child. Heâs my best friend, and I love him so much itâs hard to explain. I cherish every single moment I have with him,â she says. ♦