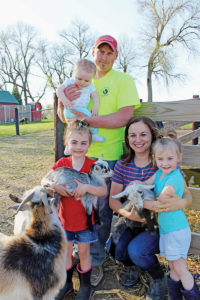 When Nicky and Zach Smith moved to their home in rural Polk City, they wanted their children to be raised with animals. With three dogs, a pony and four cats, that should be enough, right? It wasnât.

Nicky began researching goats as pets and purchased a Nigerian Dwarf purebred goat. Soon, they needed a second one to keep her company. Then they added four more. This spring, four goats gave birth to a total of 10 babies. Nicky explains her love of goats.

âI heard they are docile around kids,â she says. âI grew up with horses and always wanted our kids to have the same experience we did raising animals.â

Similar to a mini-circus, the goats entertain, walking on balance beams, jumping on the ponyâs back and performing escape artist tricks when a gate opens.

âThe higher they climb, the happier they seem to be,â says Nicky. âThe goats are intelligent and are escape artists. If thereâs a way out of the barn, theyâll find it.â

Nickyâs daughters, Remi, 6, and Ellie, 5, enjoy cuddling with the goats. Remi demonstrated walking on a balance-type beam set up for one of the goats, coaxing her along as she climbed up the spool. Nicky says she trusts the girls and goats together.

âThe girls can go and play with them, and we donât have to worry about them,â she says.

Nicky cites farm life as a positive learning environment. Both she and Zach grew up on farms.

âItâs good for the girls to learn how to do chores and take care of the animals,â she says.

Remi feeds hay and grain to the goats and hopes to show a goat at 4-H this year. Theyâve also welcomed students from North Polk Elementary School.

The goats are capable of producing as milking goats, but the family hasnât attempted it yet due to time constraints. In addition, the Smiths raise chickens and Berkshire hogs.

Goat clean up and care isnât generally difficult, but Iowaâs freezing temps do present challenges. During a power outage last winter in the extreme cold, the heat lamps stopped working, and the water troughs froze.

âAre we crazy to raise animals like this?â asks Zach. âIt was brutal cold in January, but all the animals made it.â

When the goats went into labor, they needed no assistance. Two goats had triplets, and one had twins.

âI didnât help them,â says Nicky. âItâs like they waited for us to leave to have their kids.â

âThey really are friendly,â says Nicky. âThey get in your face and love them all over.â ♦