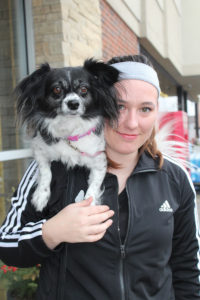 Jocie tricks: In addition to being a service dog, Jocie has been trained to perform a variety of tricks by its owner Amanda Cantwell.

When Amanda Cantwell received a puppy for her 20th birthday, the dog did more than play fetch or go for walks; it helped relieve her anxiety and panic attacks. She initially didnât intend to train her dog Jocie as a service dog, butâ¦

âShe fell into the role of a service dog and helped ground me when Iâve suffered from panic attacks,â says Amanda.

In fourth grade, Amanda was hit by a truck, causing brain trauma. With short-term memory loss, it added to her issues of anxiety. She found Jocie would jump on her and keep âpawingâ her with deep pressure therapy.

âIt shortens my anxiety attacks, grounds me and pulls me out of the episode,â she says. âItâs like sheâs telling me, âIâm going to help you, and youâre going to let me.â â

Jocie accompanies her in public, and Amanda dispels myths about service dogs.

âThere are numerous invisible disabilities. People assume only the blind or wheelchair-bound have the right to a service dog,â she explains. âThere are so many other things, such as those with diabetes or PTSD. People often donât look skin deep.â

Jocieâs trainer inspired and mentored Amanda to also become a dog trainer. She has trained dogs for veterans with PTSD. For example, a PTSD victim suffers from unannounced strangers approaching him, triggering a flashback.

âWhat the dog does is step behind the person and give their owner breathing space,â she says. âIf they have night terrors, deep pressure therapy helps calm them down.â

Sheâs trained dogs who monitor diabetics. A chemical imbalance from either low or high blood sugar is detected from the ownerâs saliva, and the dog alerts the owner by pawing on him or her.

Amanda suggests asking the owner before petting a service dog. The dog is trained to ignore other people or dogs, but itâs also trained to protect the owner. Other peopleâs scents can throw off the dogâs abilities to detect certain smells.

âPetting a dog could distract them from doing their job,â she warns.

Because of her love of dogs, her K-Nine Coach business helps train stubborn dogs, including one who was tied up on a chain, to one who now behaves.

âItâs seeing people at their witsâ end with no hope, ready to put their dogs down. The moment youâre ready to give up, the dog has a light bulb moment, and everything clicks in place,â she says.

Thatâs rewarding for her â seeing the change in herself and making a difference in someoneâs life.

âJocie brought me from my lowest point. There was hopelessness, and now thereâs hope. Folks might say itâs no big deal; itâs just a dog; itâs not life and death. But to that person, the service dog can save their life,â she says. ♦