But remember, âDonât trust the pig.â 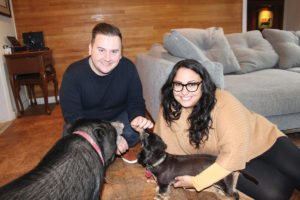 Rosie, the pig, and BeyoncÃ© both sit still, awaiting a treat from their owners, Lis and Jordan Frentress.

Lis and Jordan Frentressâ pet, Rosie, lacks manners. When marching across the kitchen floor, sheâll stomp her pointed hooves on peopleâs feet, knocking over objects along the way. A triple-locked childproof latch for the garbage bin protects her favorite fixation (garbage), but you canât blame her for honoring her natural instincts. After all, sheâs a pig.

Rosie is a Vietnamese potbelly pig. The Frentresses had no intention of adopting a pig, but as Lis skimmed an online swap site featuring a teacup pig, it piqued her interest.

Lis messaged the person who was selling the pig, but Jordan wasnât thrilled with the idea. They declined. A few weeks later, the owner reached out to Lis again, offering to give the pig away. They learned the owner was a teenager who hid the pig from her parents and fed it guinea pig food. Once her parents found out, she was forced to give it away.

âWhen we got her, we discovered it was actually a potbelly pig and not a teacup pig,â says Lis. âThe pig wasnât trained to be around humans.â

Since Rosieâs arrival, the couple has grown to love her, although the âcluelessâ pig lacked manners and needed to be socialized. Theyâve potty trained her. When they ring a bell or crinkle a plastic sack, she comes running and hops outside.

Their dog, Beyonce, gets along OK, as long as Beyonce is boss.

âBeyonce rules the roost,â says Lis. âIf sheâs outside, then the pig waits by the door for her to come in.â

The two pets often vie for their parentsâ attention. If Rosie gets in trouble for trashing the garbage, Beyonce cowers and runs away, as if sheâs the scolded one.

Surprisingly, Rosie displays pet-like qualities. She jumps up on the 2-foot-high bed. When Jordan commands âsit,â Rosie remains still for a treat. Rosieâs biggest motivation tool is food. However, the couple watches her food intake so she doesnât get too big. Some potbelly pigs can weigh up to 200 pounds, whereas Rosie tips the scales at 70.

They feed her a vegetarian diet (no bacon!) and avoid feeding her trash or leftovers.

Jordan is attempting to teach the pig manners. He explains, âWhen she eats, she destroys her food. We say, âBe polite,â and sheâll back off. Itâs a huge progress for her, a little at a time.â

Rosie is a homebody and prefers routine. When friends visit, theyâre warned to avoid keeping drinks or food setting out on any tables. Jordan states their Rosie motto clearly to visitors, âDonât trust the pig.â

Rosie sleeps in her own bed and gives âsnoutâ kisses to Jordan and Lis. Both like the uniqueness of owning a pig.