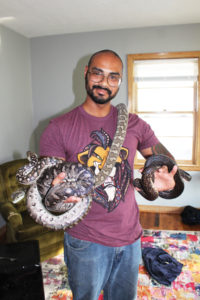 âWrangling three snakes at once is hard,â says Erick Hernandez while trying to capture a photo of his Savu python, coastal carpet python and Berry Island boa constrictor all at once.

A Jim Stafford song from the 1970s, âI Donât Like Spiders and Snakes,â ran through my head as I drove to my next CITYVIEW assignment â an interview with a snake owner. Could I set aside my intense fear and loathing of snakes for a byline and a few bucks? Yep, I did. And hereâs the story.

Erick Hernandez is my polar opposite. He loves snakes. With 15 snakes, he brought a âparty samplerâ to the interview â a Berry Island boa, a costal carpet python and a Savu python â all writhing around in drawstring, pillowcase-type bags.

He pulled out Rafia, a Savu python, which quickly coiled around Hernandezâs arm and slid up his shoulder while he explained his snake obsession.

âHis passion for the types of reptiles people donât really like drew me to him,â he says. âIt was a healthy obsession.â
At age 13, he obtained his first garter snake, and at age 16 he owned a bull python. Yet, living in Puerto Rico, owning and possessing certain snakes is illegal. He explains why he moved to the U.S. in 2007.

âThat was one of the reasons why I wanted to move to the U.S., because I wanted to keep different kinds of snakes,â he says.

âI learned how to grip without getting bit and never touch a snake from afar,â he says. âI donât let snakes get too close to other animals, because their mood changes.â

He adds that heâs been bitten, but not recently, saying, âIf I do, itâs usually my fault because one of the snakes didnât want to be touched.â

He also attends reptile shows, where his main goal is to provide snake education. He dispels the myths of snakes.
âPythons arenât always aggressive and donât get that huge so they can strangle you,â he says. âSnakes arenât slimy â really â theyâre scaly instead.â

He breeds snakes for color and patterns. Heâs surprised by how the female snakes take care of their eggs by shivering their body and coiling around the eggs to incubate them.

The most difficult part of snake handling and breeding is once you find a species in the wild, itâs hard to establish a captive life. Snakes eat about once a month and diet consists of rats or mice, which he buys in bulk, keeping them in the freezer.

One byproduct of multiple snakes is shedded snake skins. From one 8-foot, 60-pound snake, heâs made a perfect skin head into a candleholder and has glued skins on canvases.

Erick says itâs hard to pinpoint why he likes snakes.

âIâve always dreamed of owning snakes as a kid. Itâs exciting,â he says. âI like keeping them. Itâs truly a gorgeous animal.â ♦