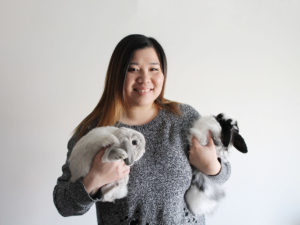 Courtney Lovan was already crazy about rabbits, and she jumped at the chance to raise two of them.

A hairstylist by day and student by night, Courtney Lovan never imagined she would be giving a rabbit a haircut. However, that doesnât mean sheâs ready to become a full-time pet groomer.

âItâs too stressful,â Lovan says. âAt least if I tell a human to sit still, theyâll do it. They (rabbits) donât listen to me.â

The rabbit in question is Frankie, a fluffy black-and-white American Fuzzy Lop. Frankie is one of two pet rabbits; the other is an equally fluffy white Mini Lop named Louie. Both are a year old, and Lovan says they can live to be as old as 15.

Each rabbit came from a different former coworker. About a year ago, Lovan volunteered to take them after they were no longer able to be cared for. Frankie was in particularly bad shape. It had lost half its hair, had mites and was extremely stressed.

âSheâs come a long way since being half bald,â she says. âYou wouldnât think so now because she has such long hair, and we have to give her haircuts every other week.â

She and her fiancÃ© bonded the two rabbits when they took them in. Lovan thinks that process helped Frankie recuperate.

âOne (Louie) is in charge and runs the show, and the other (Frankie) just follows along,â says Lovan. âI think they like each otherâs companionship.â

This is Lovanâs first time as a rabbit owner, but the opportunity was rather serendipitous. Her fiancÃ©âs best friend has a rabbit that the couple is fond of, plus Lovan already had an interest in the animal.

âI was crazy before I got them,â she says. âI follow this Instagram called @bunnymama, and she has a whole website on how to take care of your pets and how to potty train them and make sure they can live cage-free. I found a lot of tips and tricks from her.â

Thatâs right. Lovanâs rabbits roam cage-free when she is home. After an initial potty training stage, she says the rabbits donât go to the bathroom on the floor. They always run back to their litter box to take care of business.

Lovan says they still stay near their cage area. They once made an attempt to adventure down a nearby hallway but became too scared and turned around. When Lovan isnât home, she is forced to put a lock on their cage.

âTheyâre so stinking smart,â she says.

Several times the pair has escaped, and most recently they chewed through their homeâs Internet cables. When they arenât chewing on cords and coffee tables, Lovan says they eat typical rabbit food like hay, pellets and greens. Then there was the time she tried fruit.

âI gave them a strawberry once, but the white one was red everywhere so it looked like she committed murder,â she says. ♦