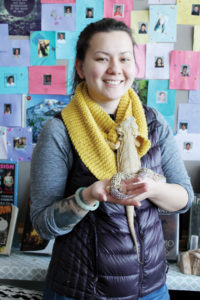 Krys Rankin knew she wanted pets for her classroom at Lincoln RAILS Academy â where sheâs taught English and special education since 2013 â but she had one hard and fast rule: nothing that smells. Mice were a no. Hamsters were out. Bunnies, while cute, also didnât make the cut. Reptiles, it seemed, were the perfect choice.

âThe reason I went with reptiles was because weâre not going to have issues with allergies in regards to bedding and stuff like that. I really wanted a snake, but the kids are really freaked out about it,â Rankin says.

She also contemplated frogs (too wet) and chameleons (too fragile), and eventually ended up with a bearded dragon and leopard geckos, gifted to her in the summer of 2016 from a friend with too many pets.

âI was like âDude, youâre never going to get a girlfriend with all of these pets in your house,â â she says. âSo he donated them to my classroom.â

She named the male bearded dragon Cupcake â a funny contrast to its grumpy demeanor â and the geckos Elizabeth and Geico â the latter of which was named by her students, who were naturally inspired by the insurance companyâs gecko.

âPeople like lizards; theyâre not scary. And the geckos were super cute; the kids think theyâre adorable,â she says.
Another leopard gecko was donated by a studentâs mom who worked at PetSmart, who often adopted the neglected and unwanted lizards from the store, and thus Rankin was gifted a wonky-eyed gecko she named Paige. A female bearded lizard Rankin named Rose came from TnT Reptile Rescue with funds from My Classroom Pet Grant. That brings Rankinâs reptile count to five: two bearded dragons and three leopard geckos.

âI kind of end up looking like a zoo in here sometimes, but itâs OK,â she says.

The administration clearance for classroom pets was minimal.

âI just had to ask my vice principal, and they were like âYeah, as long as it doesnât pee on the floor or get out, thatâs fine,â â she says.

The different reptile species do not intermingle.

âIâm sure something not good would happen,â she says.

Rankin cleans the tanks and has three three students who help feed them by hand. Never has anyone been bitten.
âRose is very sweet. She just wants to cuddle, and she just sits on top of you.â 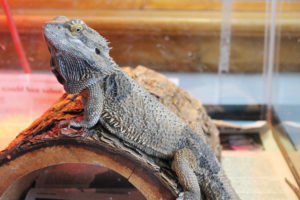 Cupcake is one of two bearded dragons in Krys Rankinâs classroom. âI wanted something that was going to be interesting for them to look at but not a classroom distraction,â she says.

Their differing and sweet personalities were unexpected and is one of the things Rankin loves about the creatures. They are rarely part of lesson plans, instead Rankin uses them to build rapport and for positive rewards.

âI also have some kids who use them almost as a mini therapy pet. We have a lot of kids with a lot of different mental illnesses and trauma, and I let them just really enjoy holding the lizard and hanging out with them,â she says.

Rankin also jokes with students that when lizards appear to be acting up, itâs because theyâre off task, and for a hot second, they believe her.

âI think funny stories usually freak out a student or two,â she laughs. âItâs a good, humorous way to liven up the class and lighten stuff up.â ♦