A tale of love-filled guard llamas 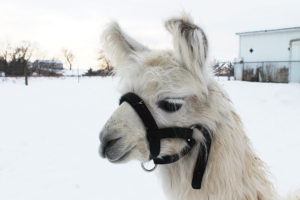 âI donât know how many times my husband and I would talk, and I would be like âI think sheâs the best thing weâve bought,â â says Lacey Swedberg.

The Swedbergsâ path to llama ownership came in a rather roundabout way. The coupleâs youngest son is allergic to cowâs milk, and at the suggestion of a friend, they tried goatâs milk. They were unsatisfied with the store-bought flavor of goatâs milk, which Swedberg describes as âmusty and gross,â and bought their own goats. After amassing a small herd of goats at their farm in Milo â Swedberg estimates they have about 15 Nigerian Dwarf Goats â they wanted an animal to guard them.

âMy husband was very against it; he got spit on as a kid,â she says.

After doing some research, Swedbeg found a 1-year-old llama named Magnolia in Atlantic and picked her up in February 2017.

âWe picked her up, and I put her in the back of my truck. And she didnât spit, and I was like, OK maybe this will be alright,â she says.

Magnolia hadnât had much previous human interaction, and her first few days on the farm Swedberg worked with her and loved on her.

âIt was a week, and she was running to us. So full of life,â she says. âThey just have such a bad rap that theyâre spitting, mean, nasty things, but theyâre not like that.â

Weighing 200 pounds and standing 5.5 feet tall â taller than 5-foot, 2-inch Lacey â Magnolia was a hit with the family and the goats, bonding quickly with both.

Sadly, Magnolia passed away in November 2017 at 18 months old, after it was attacked by a mountain lion. The attack is one of a handful the Swedbergs have experienced as of late. While the family was devastated by the loss, the silver lining was that all the goats and other animals on their farm were safe. Magnolia had done the job as a guard animal well. 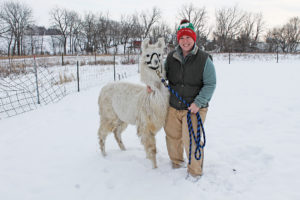 Lacey Swedberg first purchased a llama as a guard animal and then fell in love with their cute, playful personalities.

However, Magnoliaâs legacy will continue when the Swedbergs get the llamaâs baby brother in April.

Shortly after losing Magnolia, the Swedbergs got a new 7-month-old llama named Suree, who was originally meant to be a companion to Magnolia.

The second go-round with llamas has been just as enjoyable for Swedberg.

âItâs just very easy to allow them into your heart,â she says.

Suree is currently about 150 pounds and 5 feet tall, but Swedberg expects the llama to get much bigger, as Surreeâs mother was close to 400 pounds.

A proud llama mama, Swedberg has lots of llama gear, including llama pants, shirts, leggings, socks and a hat. She thinks she is able to find so many llama items because llamas are on-trend pop culture wise.

âSince this has happened, I get tagged in so many llama things a day itâs not even funny,â she laughs. ♦