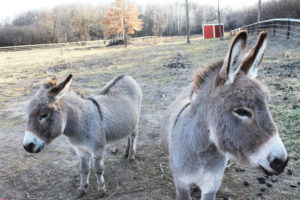 Earl and Clyde roam their 3-acre pasture in Newton.

Courtney Tompkins was destined to own miniature donkeys.

âI saw them as a teenager and just thought they were super cute and said, âOne day Iâm going to have mini donkeys,â â Tompkins says.

The miniature donkeys found their way to her in the most 21st century of ways: Craigslist. The year was 2016, and Tompkinsâ parents were living in Pleasant Hill when her mom casually mentioned they wanted some goats to eat the weeds in their yard. Tompkins hopped on the Internet, and, lo and behold, found a pair of miniature donkeys â a mother and a son, each weighing about 300 pounds â on Craigslist. Hoping her teenage dream would finally come true, she begged her mom to get the miniature donkeys, but her mom feigned disinterest. In the meantime, her mom let Tompkinsâ husband know about the mini donkeys, and he surprised her with them on her May 27 birthday.
âI guess it pays when your husband doesnât know what to get you for your birthday,â she smiles. âAnd we love them.â

Living in Urbandale at the time â while on the hunt for an acreage â the miniature donkeys lived with her parents (her brother took care of them) until her family found a new home.

Tomkins named the duo Bonnie and Clyde. Bonnie tragically passed away last winter when it slipped and hit its head on the ice, and the normally feisty Clyde â 2 years old at the time â couldnât have been sadder.

âDonkeys are pack animals, and he would just walk around the yard and cry,â she says. 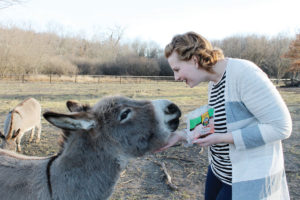 Knowing Clyde needed a friend, Tompkins contacted Lusco Farms Donkey Rescue and let them know that whenever they had a single mini donkey, her family would give it a home. Earl, 11 years old at the time, joined Clyde in February of 2017.

It was during the duoâs time with her parents that the miniature donkeys enjoyed some momentary fame. This past June, Tompkinsâ parents were in the midst of their own move. With the hustle and bustle of it all, someone forgot to close the gate one night. Soon the miniature donkeys were roaming the streets of Pleasant Hill and even made the news. Since donkeys donât typically wear collars, the Polk County Sheriff stayed with them all night until he could find the owners the next morning.

âEveryone on Facebook was tagging me and being like âLook Courtney! Donkeys in Pleasant Hill, are yours fine?â and I was like âOf course mine are fine blah blah blah,â â she says. âThey didnât tell me until December that, yes, in June my donkeys were wandering Pleasant Hill and they didnât want to tell me.â

Tompkins and her family moved to Newton and a home with 10 acres in December of 2016. Her husband works for the City of Johnston and commutes, while she takes care of their two children and works from home as a freelance graphic designer. Her husband completed the 3-acre pasture for the mini donkeys in 2017, and they were finally able to move in with her and her family.

âThey roam around, run around, and just pretty much eat and sleep all day,â she says, adding that their care and maintenance are slightly less than a horse.

Tompkins says Clyde is definitely the feistier of the two and likes to play and eat. She says that heâs the fatter one and is always first to come get food when she calls for them. Earl, however, is her happy-go-lucky Eeyore type just plodding along. The differences donât matter to the donkeys, though.

âThey rarely are far away from each other. Even though they have a couple acres to explore, theyâre almost always near each other, and they keep each other company,â she says.